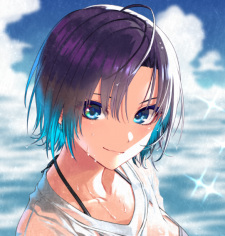 Purpose Apr 21, 2022 4:55 AM
Saw you wishing another dude smaye.
Hope you have a blessed remaining days of Ramadhan!

Stardew Jan 9, 2021 3:16 PM
Hey there, Happy new years! I hope you enjoy your recommendations and to see you next year :D

Aleczandxr Nov 25, 2020 8:39 AM
This morning I added a few anime that I've completed to my list because I realized that I finished them but that they were missing from here for some reason. I might have just forgotten to add them. Either way, I watched Genshiken this past summer, maybe June or July sometime. I didn't tweet about it though - I don't always tweet about stuff I'm watching, it's pretty random sometimes.

And I don't think I'm interested enough to check the manga, but thank you for the suggestion! I do appreciate it, and I'm glad you enjoy the videos!

cl_skinnyguy Apr 8, 2020 8:37 AM
sadly they don'wanna tryin to promote their song and other works tho or just to be opening to some anime besides honey and clover so they can gain more people to discover thier music. atleast they are already known as veteran group music / band in japanese music industries. their style of music really great to listen to it.

cl_skinnyguy Apr 4, 2020 5:12 AM
u have a good taste with liking spitz. and im happy bout that.
first thing after 1 weeks break using mal and i see u posting one of my spitz fav song. trully made my day gj

plastic_rainbow Jan 5, 2018 4:07 PM
Hello~ Thank you for your recommendations! I've never heard of Akumetsu before so thank you for introducing it to me~ I've only read a volume so far and might need to read more in order to give a general view on it. The rating seems really good though so I don't believe I'll be disappointed by it. ^^ Thank you for rec'ing me Jin-Rou as well! It's been sitting on my PTW for a while now, haha. It looks really good and I can't wait to watch it. I'll get back to you once I do~

Epistemophile Jan 2, 2018 1:16 PM
I'm so sorry for the late late reply, I got a bit caught up and honestly forgot about this. Well, the big match was pretty exhilarating if I were to judge as a neutral football fan, but frankly, I was a bit frustrated by our weak performance in the first half, and the way Cech let in that final goal when we were leading. That 3 consecutive goal comeback, though, had me jumping around like a crazy person. And as for why I suggested Simeone, it's because I feel recent Arsenal has lost some of the drive to win, and he seemed to be the best person to me for re-instilling that grit and winning mentality in the team, given what he achieved at Atletico. And well, one of our major recent undoings has been our weak defence, we really can't ignore that much longer in favour of playing our traditional good looking football.

Epistemophile Dec 18, 2017 5:09 AM
I really respect Wenger as the person who was the first to truly revolutionize club football. I mean he was pretty much the first manager to scout abroad for talent, and one of the first people who emphasised the importance of a footballer's off-the-pitch routine, now look at how important both of these are now. Plus, as you said, he was the one who stabilised the club when it was in crisis, and we definitely have him to thank for the numerous players he's developed over the years.
I believe that his only big weakness lies in his stubbornness. He is not a poor tactician per se. It's just that he refuses to change with time, desperately holding on to his old style of play as the only path, and ignoring all the alternatives.

If we talk about who I would like to see as Wenger's successor, I would say Diego Simeone. I believe he could bring the much needed hunger back into the Gunners, and aside from that, he is a very tactically solid coach, what with his stellar showings at Atletico Madrid. Also, I would love to see Henry pull a sudden Zidane and take the reigns from Wenger, in what would be a dream moment for many Arsenal fans I believe.

Oh, and about the friend request, don't mention it. It's not often that you get to have a fun chat about football in an anime database site with a fellow fan of the club you support.

Epistemophile Dec 16, 2017 9:48 AM
Okay, thanks for the recommendation then, will start start as soon as possible. Oh, and by the way, as a fellow Gooner, what's your opinion on the whole "Wenger in/out" situation?

Epistemophile Dec 16, 2017 3:48 AM
Yeah, I've been planning to read Eyeshield 21 for a long time now, but always end up putting it off at the last second, since frankly, I know absolutely nothing about American Football. Is some background knowledge about the sport necessary to read it, like for example in Giant Killing (Football) or One Outs (Baseball), or is it somewhat like Slam Dunk, where you learn along the way?

Epistemophile Dec 13, 2017 4:30 AM
Well, those two are part of my top 5, top 3 rather, shounen story arcs that I've read. Really, the strongest part about Rurouni Kenshin are its characters, be it the heroes or the villains, each of them is so intriguing in his/her own right. That being said, Shishio Makoto was really something special, one of those few rare villains who can really change the perspective of the story. By the way, do you have a top 5 list of story arcs in shounen manga/anime?
As for Battle Royale, well, it does have its charm, with one of my favourite moments being Shinji Mimura's 'clutch shot'. But the reason why I didn't rate it higher was because I felt that gave in to several character stereotypes, in the situation presented in the manga, I would have expected plenty of grey, instead of the black and white characters that we got.
All Comments