Caption of the announcement said:

"Keiichi-san, do you wanna kiss me?"
It cannot be aired on TV, nor drawn in the manga. It's about the two...
Project "Megami to Issho ni" has started!

The 5 ep OVA's are still the best imo. Everything else is pretty much a snorefest unless you have nothing else better to do.

Does anyone know where season 2 ends off at in the manga? I tried random chapters, but I really cant find where it does, or is the manga like alot different from anime?

Hell Ya!!
Finally some new material that has been convered into episodes.
I agree that I would be very nice to actually get a kissing scene or something like that. It really sucks that their relationship doesnt progress at all.
I am huge fan of Ah My goddes since it has been the first manga I started reading and first anime I have seen. (been a fan for over half of my life already xD)
So I really hope that this a step towards a 3rd season.
(BTW any hentai adaption of Ah my goddess is blasphemy !!! Don't disgrace my favorite chars. Especially Belldandy. HANDS OFF !!! xD)

viral_hun said:
"It cannot be aired on TV, nor drawn in the manga."

I am looking forward to it! :3

Riina said:
i totally hope this means they might even expand into a 3rd series, and hopefully keiichi gets someplace this time!

Considering how much of the manga has not been adapted for anime, it should have a good chance of getting another season(or at the very least, another OVA).

i totally hope this means they might even expand into a 3rd series, and hopefully keiichi gets someplace this time! 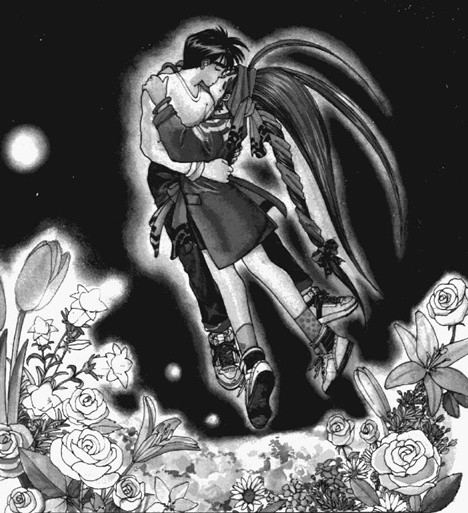 These two need to make some babies already.

...wait a min they kissed??
I Might need to read the manga..

Btw: Cool that they are releasing a OVA.

i know... i read it from the beginning. i don't know how i missed that. then again there is a long break between releases i may have forgotten.

Yeah they did kiss, even twice in the manga, but - think why it wasn't shown in the anime series? The chapter with first kiss was even adapted, but the ending was changed and kiss omitted. And the reason is... Fujishima used the anime adaptations to back out from that idea, he (supposedly) said in one interview that he rushed the thing because he simply couldn't have known his work would last this long. So in Fujishima's mind they didn't officially kissed yet, just like in the anime. :)

thyyg said:
why?
Because those two fools have yet to kiss each other.

they never kiss in the manga...at least if they did it wasnt romantically.

also i hope this leads to another season.

A trailer for the OVA was released today.

kisami said:
there is no way anyone would be so wrong as to degrade such a respectable manga/anime. although that caption does provoke the mind.

still though, in 262 chapters, they still haven't kissed. not once, and they act like husband and wife.....so maybe it is about damn time they made some progress in that department.

perhaps this ova will inspire some renewed interest in this story.

Maybe what they can't show is something so awesome that's it's sinful but moral at the same time.

Just started re-watching the OVA(the 1993 one).

Probably since it's been 3 years since the last specials and the manga is still ongoing.

I am wondering what it will be about since Belldandy is wearing a school uniform in that sketch(if that is who it is).

And in 3 years, the relation advance or not ? :o
HAHAHAHA !
But really though it's been many years. Anime was resent but the manga is really old. Cloud be, the girl in the school uniform. Though the manga time line is never similar to real life. But then again I have no idea what volume did the anime stop at.


viral_hun said:
"It cannot be aired on TV, nor drawn in the manga."

No way, not possible. Though some times there are hints of ecchi. I doubt it's gonna go in that direction.

maybe i'm crazy, but i'm only on chapter 18, and they have kissed twice already........ (i know the anime is different than the manga)

I want a whole season of Ah My Goddess instead of a measly OVA. But I will be happy with a OVA,especially if it is several episodes.

These two need to make some babies already.

...wait a min they kissed??
I Might need to read the manga..

Btw: Cool that they are releasing a OVA.

i know... i read it from the beginning. i don't know how i missed that. then again there is a long break between releases i may have forgotten.

I would actually be kinda glad if this OVA showed Keiichi and Belldandy finally getting it on. After all the anime series had me shouting "Keiichi! Why don't you just grow a pair and screw her already!"
I can't believe that even in the manga they still haven't progressed to second base.....

They still haven't kissed?! Talk about dragging on...