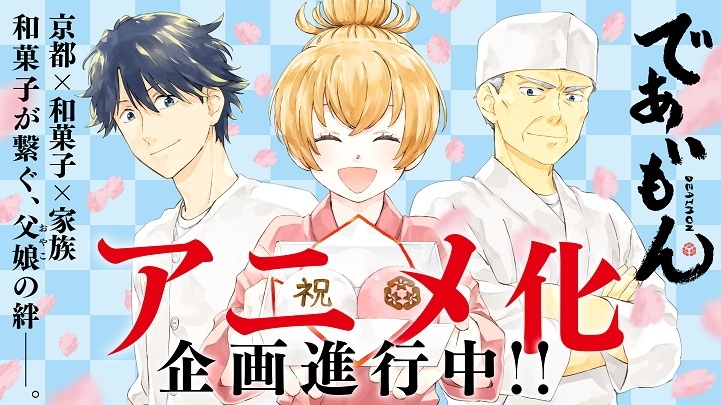 Kadokawa announced an anime adaptation of Rin Asano's Deaimon manga via a post on the official Young Ace Twitter on Monday.

Synopsis
Nagomu Irino returns to his Kyoto home for the first time in ten years when his father is hospitalized. Nagomu is eager to take over Ryokushou, the family's Japanese sweet shop, but he's instead asked to be a father figure to Itsuka Yukihira, the girl everyone calls the successor. (Source: Manga Translation Battle)

Asano began serializing the slice of life manga in the monthly seinen magazine Young Ace in May 2016. Kadokawa released the tenth compiled volume in November 2020. The 11th volume will be released on May 1.

Good to see something decent getting animated ,

For some reason, I feel like this could be a solid contender for the hidden gem of the season whenever it airs...

In any case, I’m definitely curious about this and actively waiting for more info.

Awwww this looks adorable. For some reason, I'm reminded of Sweetness & Lightning a lil bit.

slice of life + Japanese sweets? count me in...

Looks good will def check it out, also the manga

Oooh, is this a restaurant/cooking series? I might actually consider watching this!

Seems like a super obscure series, but a slice of life like that are usually up my alley.

is this 3-gatsu without the chess?