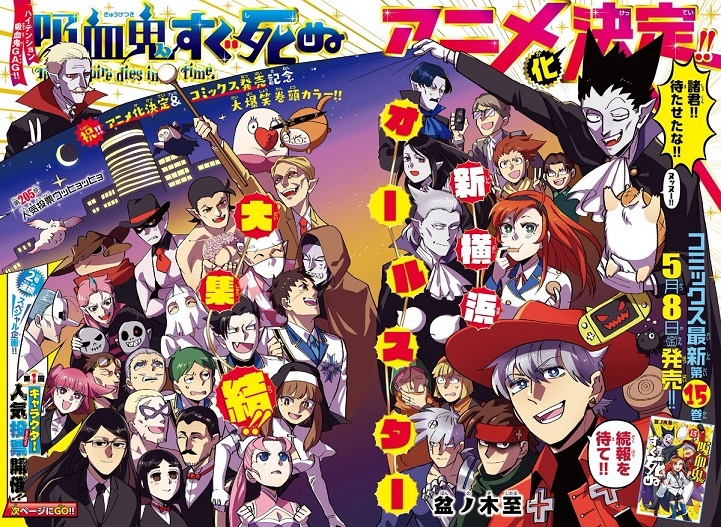 The 23rd issue of Shounen Champion of 2020 announced a television anime adaptation of Itaru Bonnoki's Kyuuketsuki Sugu Shinu (The Vampire dies in no time.) manga on Thursday.

Synopsis
Vampires are said to have many weaknesses such as garlic, crosses, and sunlight. Game-loving vampire lord Draluc just so happens to be weak to... everything. He dies, turning into a pile of ash, at the slightest shock.

After Vampire Hunter Ronaldo learned of a castle inhabited by a vampire rumored to have kidnapped a kid, he went there intending to take the devil down. However, the vampire turned out to be Draluc, a wimp who keeps turning into ash at the smallest things. Moreover, the kid wasn't being held captive—he was just using the "haunted house" as his personal playground!

When his castle is destroyed, Draluc moves into Ronaldo's office, much to the other's chagrin. Despite their differences, they must try to work together to defend themselves from rogue vampires, Ronaldo's murderous editor, investigators, and more—with Draluc dying continuously along the way. (Source: MU, amended)

It's a pretty fun comedy. Hope it gets a decent cast/crew attached to it.

Ugh. Why this instead of Atsumare? It's the only big-name in Champion that hasn't gotten anime adaptation. Very bad decision by the magazine.
Beastars, Iruma and Baki got 2 season already. Hopefully the next is Atsumare.

Looks like a ton of fun just from the picture alone. Hope it delivers!

I heard a lot of good things about this series, looking forward to it~!^^

Finally something at least distantly decent.