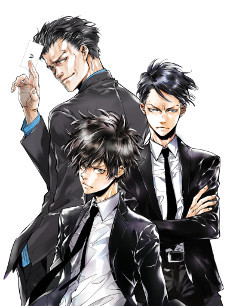 After the final episode's broadcast of Production I.G's Psycho-Pass 3 on Friday, it was announced that a new movie is in the works. Subtitled First Inspector, it will screen in Japan in Spring 2020. Amazon Prime Video will also be streaming the film.

Psycho-Pass is an original crime series that premiered in Fall 2012. It was followed by an 11-episode second season by Tatsunoko Production and an anime film by Production I.G in January 2015.

A theatrical trilogy, titled Sinners of the System, premiered this year, with the first, second, and third films opening on January 25, February 15, and March 8, respectively.


Update December 13
The Psycho-Pass production committee announced on Friday that the film will compile the third anime season. Staff and cast members from the latest season will reprise their roles. Musical unit Who-ya Extended will return to perform the film's opening theme "Synthetic Sympathy."

All I wanted to happen on s3 was a recounter between akane and kougami (of course my dream plot would include them and ginoza in some plan to take down sybil, but I'm a realistic woman and knew it would never happen). Now that s3 took down all of my expectations, I don't know if I see much future in the series ...

Ohh no.. i cant waiting this F*cking great anime !!!

News Update
The Psycho-Pass production committee announced on Friday that the film will compile the third anime season. Staff and cast members from the latest season will reprise their roles. Musical unit Who-ya Extended will return to perform the film's opening theme "Synthetic Sympathy."

will watch if the old-three characters return with more screen time, i'm not keen on the new cast.

@kyutiepie_wifeu nice insight. Who knows, maybe we'll get a 4th season, ProdIG is stacked. And maybe they'll understand what they did wrong in the anime after PP1 so we can enjoy PP as it was supposed to be.

So, lets see what movie are they made in 2020 later (is continunity of season 3, spin off of season 3 or new hero and villain aka arata and kei aren't main chara again)

Looking forward to it. 8 episodes is a joke, even being 45 min long

Reminds me I should watch season 3.

Season 1 was fantastic, but so many other shows deserve movies/new series, why is this still continuing?

For me there is no Psycho-Pass after season 1. Season 2 was one of the biggest abomination piles of fucking shit I've ever seen.

Man this franchise gets more movies than it does TV seasons.

uninstallthegame said:
pretty sure it will be shit, just as any other pp movie. still gotta watch it for the finale

If you don't like something, it's good to use at least use respectful words.


Catalano said:
Hope it will be better than PP3, I wonder how are the rating in Japan though.

Not sure how they are rated in Japan, but the series is still popular there. Not as much as before sure, but there are lots of fans left who enjoy and look forward to more content they put out (they even get light novels or/and manga). I remember seeing it trending #1 in Japan on Twitter a few times when the episodes were airing. When the 1st episode of S3 aired in Japan, it even trended worldwide. If it wasn't popular, they wouldn't have bothered to release 3 movies and a season in a whole year.

Personally, I am super excited for the next movie. I've been enjoying everything Psycho Pass by now. The director seem to have a few more plans for Psycho Pass (that's what he said), which I am super curious about.

Every non-Urobuchi Psycho Pass thing has been nothing short of absolutely horrendous. I sincerely hope this is the last punch in the face the original series gets.

pretty sure it will be shit, just as any other pp movie. still gotta watch it for the finale

Hope it will be better than PP3, I wonder how are the rating in Japan though.