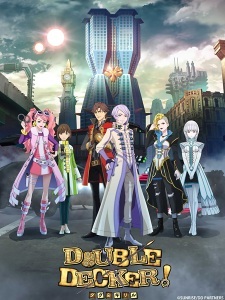 During the final episode pre-screening event on Friday, it was announced that Double Decker! Doug & Kirill TV anime will get three extra episodes. Titled Double Decker! Doug & Kirill: Extra, the three episodes will be streamed via Bandai Channel and other streaming websites between February and April 2019. The Blu-ray and DVD for the extra episodes will also be released on May 24, 2019.

A fans appreciation event for the series will be held on February 21, 2019. More information will be announced later.

Double Decker! is a part of the Buddy series, an extended project to the popular Tiger and Bunny franchise that previously topped NHK's Best 100 anime last year to commemorate 100 years of Japanese anime history. The TV anime aired between September 30 to December 23.

I really wish it gets a second season as I enjoyed this anime a lot. The last episode and teasing with the to be continued? made me hopeful for a second season.
That being said, I cannot wait for the extra.

Well this is great.

I'm so glad. I love it DD! I hope we can get a second season.

Oh, this is great news, but too bad there isn’t confirmation on a 2nd Season though! I’m looking forward to seeing these three episodes!