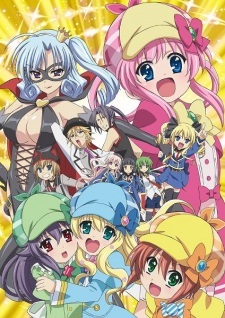 The final single for seiyuu unit Milky Holmes, which will be released on October 17, has announced that the coupling song "Soshite Gunjou ni Toketeiku" will be the theme song to the new end of the year TV special to Milky Holmes anime series titled Tantei Opera Milky Holmes: Saiko no Aisatsu. More information will be revealed at a later time. The single will also include "Mainichi Climax☆", which will also be Cardfight! Vanguard (2018) ending theme song that will start in November.

Tantei Opera Milky Holmes is a PSP game that created by Bushiroad. It received 4 TV anime series, 4 specials, and a movie between 2010 to 2017 by J.C.Staff. Students from Holmes Detective Academy try to solve various cases in the anime. It has been announced that the seiyuu unit Milky Holmes, which consists of Suzuko Mimori, Sora Tokui, Mikoi Sasaki, and Izumi Kitta, since 2010, would disband next February.

Didn't even know its source is a game, the anime itself is still on my PTW list though. Good to hear there will be another TV special though.

I was hesitated to post about this when the final single info. was announced in August because neither the official project site and anime site has info. to this end of the year special anime (it was one of the news sites that mentioned it) even now.