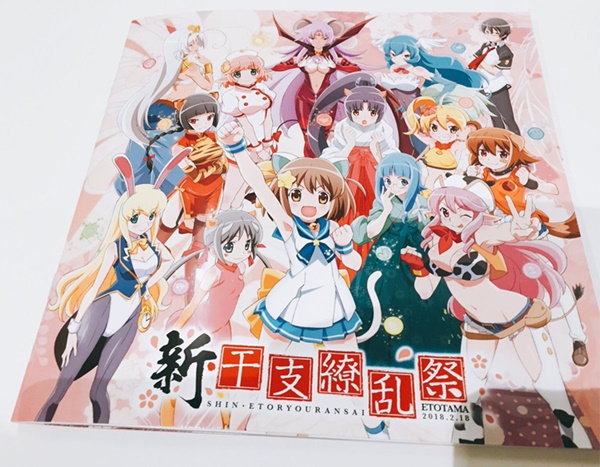 An event commemorating the Blu-ray box release of Etotama, Shin Etoryouran-sai (New Zodiac Festival) held on Sunday at the Makuhari Messe International Exhibition Hall in Tokyo, has announced that a new series based on the anime is underway. More information regarding the series will be revealed at a later date.

Etotama is a 12-episode fantasy comedy TV anime produced by studio Shirogumi and Encourage Films, which aired in Spring 2015. Six unaired short special episodes were also bundled with the releases of second to fifth Blu-ray volume of the anime.

Prior to the broadcast of the anime, Tooru Zekuu and Takashi Hoshi drew a three-volume manga with illustrations by Hiroma Hino from November 2013 to 2015. Additionally, during the broadcast of the anime in May 2015, Pony Canyon published a side-story novel penned by Masateru Fujise. The story depicts the rise and fall of Nyaa-tan in becoming a prospective cat zodiac-sign with the "help" of a human named Takeru Amato.

Ponycan USA has licensed the series for North American distribution and released it in three Blu-ray and DVD combo sets between October 2015 and March 2016.

E2tama GET HYPED!! This show flew under everyone's radar I feel like. Loved the CG.

DSM_05 said:
meanwhile here, waiting for it to come out

Me too, man. They keep advertising merch in their official twitter, but there's almost no news about season 2 at all.

meanwhile here, waiting for it to come out

I'm so glad, this show was great. When is S2 coming out though?

Finally!!! I loved this show when aired, so colorful and enjoyable show with great seiyuus cast. Also, the CGI use in this anime is one of my favorites.

Etotama is awesome! <3 I'm actually happy that it got a new season to be honest xP or a new series.

More CGI battles of Etotama will ease the pain of not getting Kemono Friends S2.

I remember Etotama, very fun, decent CG especially since it aired at a time where bad CG was king, but it sold only around 400 BDs. I'm surprised it's getting a season 2.

Well, I certainly enjoyed the first season, but was it so popular? And they will again talk about MC among a bunch of cute girls?

i never expected this LMAO

this show was so kawaii and sexy xD

give me more those eye candy CGI sakuga... those fights is lit AF!

Well, this is certainly quite the surprise. From what I remember, the first season was way better than it had any right to be, and was one of the few examples I can think of where being CG massively benefited the show. As for whether I'll watch this new series, I'll have to rewatch the original and decide if I still like it or not, as I cannot remember anything much about it now.

Ehh, like yeah why not may give this a look.

Ohh, will you look at those waifus.

oh my god!! yes, I loved this series when it was airing
I hope Watanabe Akio does the character designs again