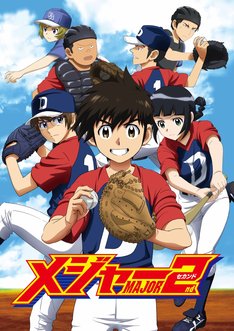 The official website for upcoming Major 2nd TV anime has announced additional cast members. Yuuko Sasamoto (Makai Senki Disgaea) will reprise her role of voicing Kaoru Shigeno and Natsumi Takamori (The iDOLM@STER Cinderella Girls series) will be voicing Izumi Shigeno in this series instead of Motoko Kumai (the Cardcaptor Sakura series) who voiced the character in Major: Message. The anime will broadcast on Saturday 5:35 p.m. via NHK ETV starting April 7.

@North514 Thank you for reminding about this series too. Well, I've heard a lot about it before, but I've been waiting for the moment to watch at least some show in the franchise.

RobertBobert said:
@North514 Thank you so much for such a detailed answer! Well, I did not watch so much sports anime, but I enjoyed the Bamboo Blade and a few titles about sports swimming like Umisho, which is pretty close to me, since I live in a coastal city. But now I am ready to wait for adaptation after your advice. I do not know much about the genre, but your description interested me :)

Though at the same time the journey and many of the things I described are from the original series and IDK if the author is attempting something similar with this series or going in his own direction or its just a short one off to pay homage to the original and I can't vouch if its just going to be a much poorer rehash of a superior past series or its good in its own way and builds upon the source material hopefully the later.

That being said Sports anime I think in general can be greatly appreciated by anyone in general you don't have to be sports fans. Also looking through your profile if there is one sports series above all that I would absolutely recommend to watch check out Hajimne no Ippo its pretty much the king in my opinion when it comes to sports anime the original is a little older though its had a few recent seasons last one coming out in 2014 done by Madhouse. Its about boxing (another sport that I never really watched going into the story) its incredibly humorous, has incredibly enjoyable characters and some fight scenes that when animated are very intense, plus the original has some great openings and OST"s.

@North514 Thank you so much for such a detailed answer! Well, I did not watch so much sports anime, but I enjoyed the Bamboo Blade and a few titles about sports swimming like Umisho, which is pretty close to me, since I live in a coastal city. But now I am ready to wait for adaptation after your advice. I do not know much about the genre, but your description interested me :)

RobertBobert said:
Can anybody advise this title? My friends very much praised the original manga, but I'm so far from baseball that I still do not even know half the rules.

I think if you like sport anime or have enjoyed a sport anime/manga I would recommend the original. Its the only sports anime that i know of that goes through the entire career of an athlete from the young age of 4, through little league, middle, high school, minors and the pro's.

Even if you don't understand baseball it can be fairly compelling with some of its characters especially towards the end of the journey seeing the characters progress from children to adults. Granted I do have some interest in baseball (not my favorite sport by any means but I do watch a few playoffs/World Series games every year) and in general I like sports anime so I definitely would be biased though I enjoyed Haikyuu a lot and I never really had any interest in volleyball so I wouldn't argue that knowing the rules or even the sport is essential to liking a sports anime as much of the drama comes from the struggles of the characters with major tropes from shonen such as striving for self improvement as well as basic appeals from victory to overcoming new challenges or obstacles as well as teamwork. Secondly its not just all baseball especially since Goro and his guardians also are pro's it evaluates what it means to retire from a sport as a career, the struggle to survive in the pro world in the later seasons and there is also a moderate focus on family life and the hardships it can bring as well as some endearing moments with regards to family bonds and how they can transcend actual relation itself.

As for 2nd personally I think it would be enhanced if you had seen the original though then again I haven't read the manga for 2nd yet and if its like the First season of major you probably could just jump in and watch it. The original is quite long though so I would just watch the first season of the anime around 25 episodes (the first season has a pretty dramatic arch early on so I think it should be obvious if you like it from the first 6-7 episodes) see if you have a taste for it and then continue with the original or just wait for 2nd to come out.

TLDR If you like some of the tropes of shonen sports anime/manga I think its worth a trying the first season at the very least and then seeing how you feel about it.

Can anybody advise this title? My friends very much praised the original manga, but I'm so far from baseball that I still do not even know half the rules.

Who would ever thought back then that baseball would be so popular in Nippon.