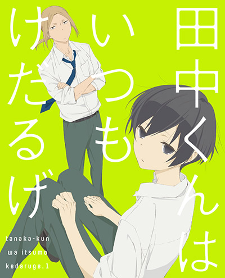 The official website has revealed the first volume of Blu-ray and DVD of the Spring anime Tanaka-kun wa Itsumo Kedaruge, which is to go on sale on June 24, will include special episode that is temporarily titled as Tanaka vs. Oota, Jingi Naki Tatakai. The Blu-ray and DVD will also include the "first season" of Tanaka-kun wa Kyou mo Kedaruge, where the first episode is currently available on the anime's official twitter account. It is still unclear if the later volumes will also include more special episodes.

Tanaka-kun wa Itsumo Kedaruge is based on the manga of the same title by Nozomi Uda, which is serialized in Gangan Online. The anime will begin to broadcast in Japan on April 9.

One of the series I'm most looking forward to out of this Spring season. Hoping it delivers. It looks very enjoyable, fun and cute.

Sounds nice. Hope the show will be good as well.

This might be fun. Hoping the main series delivers too.