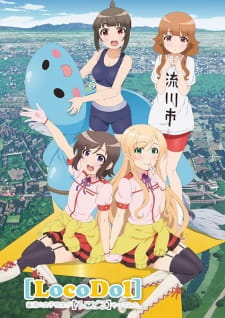 A new OVA for the idol girls series Futsuu no Joshikousei ga [Locodol] Yatte Mita. has been announced on the anime’s official Twitter. The news was first given at the 2nd Early Summer Nagarekawa Festival which took place at the Differ Ariake Arena in Tokyo today, and consisted of live events including the main cast of the anime.

Locodol is written and illustrated by Koutarou Kosugi. It was first published in Ichijinsha's Manga 4-Koma Pallete magazine in its October 2011 issue. The series depicts the struggles of high school student Nanako Usami and her senpai, Yukari Kohinata as they come to work as the town's local idols known as the Nagarekawa Girls.

The first season aired in Summer 2014 with 12 episodes. An extra episode, Nagarekawa, Annai Shite Mita., was bundled with the anime's first Blu-ray/DVD volume on September 24, 2014.

Need to watch it still :L

This is awesome, since it's one of the best idol anime out there! I'm definitely looking forward to see more of this masterpiece, I might even rewatch the first season now lol!

Yay! This was one of my favorite anime of 2014! Hopefully it'll be getting a second season soon :D

Great news! It was super fun to watch it!

This makes me happy.

Great :)
will check it up

Hoppy said:
How about a season 2 please.
This, definitely this.

Let's see if Nanyako Nanako can pronounce her name correctly this time~ c:

How about a season 2 please.

Nice to see that, I find the series relaxing.

good news, but season 2 when

I hope it'll contain a good performance. The SOL aspect of Locodol is a bit too sluggish, tbh.

Cool, I'll definitely try and check this out as I actually enjoyed the series and wish it got released here on dvd/blu-ray.

Locodol was a good show, so I'm in for more.

Cool. I've sort of enjoyed it.