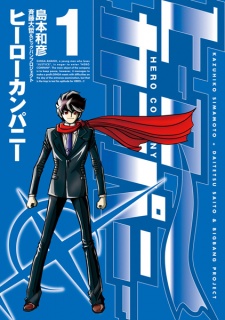 An OVA adaptation of comedy manga Hero Company will be bundled with its eighth volume, to be released this Fall. The announcement was made in the May edition of Hero magazine, where the manga began its serialization in 2011. Staff and cast will be revealed in the seinen magazine's upcoming issues.

From the manga's first volume (right):
Ginga Amano, a young man who loves "justice," is eager to enter "Hero Company." The main objective of the company is to keep peace; however, it manages to make a profit. Ginga meets with difficulties on the day of the entrance examination, but that is the trap to test his aptitude for Hero..!!

The manga is written by Kazuhiko Shimamoto, the original creator of anime retailer Animate's mascot, Animate Tenchou. In addition to his own anime spin-offs, the character has also made cameo appearances in other comedy TV anime, such as Lucky☆Star and Hayate no Gotoku!. Another of Shimamoto's well known manga series, Honoo no Tenkousei, was adapted to a two-episode OVA in 1991.

An animated PV was made to advertise the third volume of Hero Company in 2013.

Short and fun. Sounds good (well, at least, nothing to lose). This series sounds like another manga I've read before but with a much more lighthearted story.

Where's the "Action" tag? Or is it more of a comedy series than action? Either ways, it might be a fun watch. Hope they release a PV for the OVA soon.

Never heard about this before, but it sounds pretty interesting. I'm definitely going to check it out.