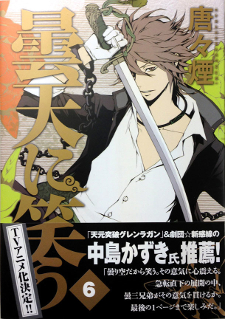 According to the cover of the latest September issue of monthly Comic Avarus, shoujo manga "Donten ni Warau" will be adapted to a TV anime series. The manga started serialization in October 2010 and ended earlier in May this year. Six volumes of the manga were published. At the moment, staff and cast information is not yet available.

Seems to be a fairly decent manga.
May end up watching.

The fact that the manga is completed sorta give me high expectations for the anime adaptation :3

I'm probably going to check this out. Looks interesting.
Think I'm going to go and find the manga to read before hand though.

It sounds interesting and I certainly love me some shoujo, so I'll give it a shot!

I hope it's as good as the manga which is really good and resembles josei more than shoujo. And the fact that the manga is already completed doesn't hurt either.

Chocobana said:
So what I'm saying is not that "action and badassery" are not for girls, but that it does not follow the common aspects that we've come to associate with shoujo mangas.
This reminds me of two lists which were referenced in another forum sometime (1 and 2). They may be about anime and not manga, but from the lists it does seem like girls like more... complicated stuff than guys or something. So that this manga is running in a shoujo magazine isn't very surprising imo. Moreover, from my experience at least, the art is very shoujo manga-ish as well.

They're going to ruin it Q_Q
hopefully not ;m;
I'm definitely expecting that the art won't be as good, but since it's concluded, there shouldn't be too many alterations content-wise... (I hope...)


SquChan said:
Wow, cool! Didn't expect this at all though I always thought it'd be great.
Definitely gonna watch! And hopefully I won't see any certain seiyuu in this one...
I also thought so, but at the same time, I'm worried how it'll turn out...
Now that you're mentioning that, a bad selection of seiyuu could totally ruin it for me... Nooo~ Q_Q

Wow, cool! Didn't expect this at all though I always thought it'd be great.
Definitely gonna watch! And hopefully I won't see any certain seiyuu in this one...

symbv said:
The latest (final) vol.6 released today also has the news about the anime adaptation.

I've seen volume 5 has the same announcement too for people who bought it recently before volume 6 release.

Action and badassery with some manservice?

I'll keep an eye on this!

The latest (final) vol.6 released today also has the news about the anime adaptation.

Are you freaken serious!? YESSSSSS
better not ruin it D:<

They're going to ruin it Q_Q
hopefully not ;m;

Sounds intriguing... looks like I'll be checking out the manga soon!

The manga is awesome. I'm so psyched for this.