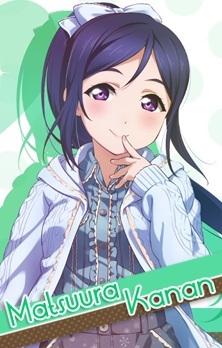 Yurippe May 15, 2016 3:17 PM
I've missed you too!!!
I'm also still alive BUT next week is finals so idk about the nearest future ww
How have you been?? What have you been doing?? Since you're on a hiatus from MAL does that mean that you're busy or that you've moved to another website? :D

LucarioDude Apr 23, 2016 4:56 AM
No worries, at least you responded in the end. xD I've been pretty busy with work and assignments myself. I hope your mid-sems went alright~

I do have the game on my phone but I haven't exactly played it yet. I'm pretty crappy with rhythm mobile games but I'll give it a shot. I'll do it mainly for Shiburin though heh. I don't mind Japanese-only games. I play Fate/Grand Order and that's Japanese-only. I'm way too addicted to that game.
I'll get to it eventually. I gotta finish Cinderella Girls first. ;~;

I really liked Erased overall and the ending was really nice. Airi appearing at the end made me teary-eyed. Airi was best girl.
The teacher being the main culprit/antagonist was quite obvious in the anime at times. I hear it was less obvious and more suspenseful in the manga. Haha, yeah but once I saw the part where there was loads of candies in his car's glovebox, I knew he was the guy behind everything. Erased reminded me of the game Life is Strange; lots of similarities between the two.

I haven't finished quite a bit of anime last season as well but ended up started new ones from this season anyways. D:
Grimgar was really good though, I recommend finishing that at least.
LOL, not a Mary x Haru shipper? Personally, I love that pairing. Yume x Ranta is a bit strange though. xD
It deserves a 2nd season, hope it happens some day.

Musaigen was such a strange anime but lots of fun. I still need to finish the final 3 episodes though, better get to that some time.
I freaking love Haikyuu!! Episode 24 of S2 was AMAZING. The last point went on for so long, it was intense. I'm excited for S3, gawwwddd dayummm.
Oh man, I fell behind in Shouwa as well, also need to finish that myself. .__.

I'm loving Re:Zero! The whole time-leap thing reminds me Edge of Tomorrow/All You Need Is Kill or a Steins;Gate x KonoSuba fusion. Elsa is one scary betch tho holy hell. Koutetsujou no Kabaneri is also really awesome; that's literally a hype train of an anime heh. Boku no Hero Academia is also really good, I'm a sucker for superhero stuff so this is right up my alley. Joker Game and Bungou Stray Dogs are also quite promising shows but I've only seen an episode of them. I still needa check our Kiznaiver tho.

Not a problem, I just think it'd be nice to talk there instead of walls of text here. :P I'll send you a PM with my Skype.

Haha yeah, but at least I won't have any problems with my teeth in the long run now. I'd say the sooner you get them removed the better but it is a pretty painful experience after the removal. D:

Frau was honestly best girl of R;N imo although Aki was pretty cute too. Frau was literally a walking meme and her laughs always got to me. Although that one episode when she became really depressed was pretty sad.

Rin is so darn gorgeous, so much great fan art especially that makes me drool. I mean wat. LOL Anzu is a cute loli. Uzuki is great too, very energetic. Ooooo, I'll be sure to check the original once I finish CG. I haven't watched CG lately though. Busy with uni now that it's back and also keeping with with weekly shows. ;~;

Latest episodes of Erased have resolved some pretty major problems but there's 3 more episodes left. Really looking forward to how this ends and who the main culprit is although I'm pretty sure I know who it is.

Haha, don't get me wrong I still really like Yume but Mary has shined so much as of late. I'm shipping Mary and Haruhiro even more now like dayum! Mary da bess~

Yeah, I guess some things from novels just don't well at all when adapted into an anime or movie in general. A real shame, ah well still a nice watch.

Haha, well I sure am loving the fanservice in Musaigen. Mai is just MMMMM... I mean awesome. LOL yeah the cat ears episode was so adorable, gave me diabetes. That one episode with the Phantom Monkey and the hot springs was SO weird yet hot though omg. Not gonna lie though, loved that episode. :P Stride lately has become a bit melodramatic but hopefully it ends on a good note. Speaking of sports anime are you watching Haikyuu?!?!?!
KonoSuba is definitely the comedy of this season, never fails to make me laugh.
Agreed, the rakugo sure is surprisingly enjoyable. I also find it interesting how majority of the anime has been focused in the past than the present. Have you seen the past few Shouwa episodes?! It got really serious. o.o

Btw, since we have such long messages if you have Skype we can message there instead if you want. :P

LucarioDude Feb 20, 2016 6:11 AM
ROFL true that, but how can you play Splatoon whilst in the toilet. I'm pretty sure the Wii U Gamepad would only show the map and not the actual gameplay. DD; RIP toilet life.

I was put to sleep via general anesthesia so didn't feel the pain during the operation. Although, afterwards it hurt like hell but I constantly kept putting ice-packs around my jaw and just spend the rest of the day resting. It sucked not being able to eat solids for like an entire week so I had to survive on yoghurt, jelly , soup and good ol' congee. xD Ah poo, our carefree animu life ends soon, I guess watch whatever we can before we go back. :P

You said it, I shipped Aki and Kai together so hard. It was very satisfying to see them end up together and dat kiss, hnnnnngggg. Frau was hilarious though, she made the show for me. Duhuhuhuhu~

I've started Cinderella Girls and boy am I already loving it. Rin is definitely my favourite girl so far. I'll be sure to check out the original series once I finish CG.

Erased keeps ending with those nasty cliffhangers; making me want to read the manga so badly but I'm trying my best to hold back. Dx
Yeah, Ajin's CG is pretty off putting to begin with but the story itself is really good. It's definitely a great series if people can get passed the CG. At the very least it's not like rotoscope.
That's a real shame, I also really love Grimgar. The slow pacing actually benefitted the series, especially during the latest episodes. Grimgar is pretty much what SAO wish it could've been. Mary is da bess tho. :D

Ooooo HaruChika novels, those must be a good read. That's a real shame but to be expected. Personally I find HaruChika to be a bit melodramatic at times but it's still a nice watch.
Musaigen is great too but too bad quite a lot of people don't really like it since it's more fanservicey than what KyoAni normally puts out. Nijiiro Days is pretty fun, I read a bit of the manga before it aired and really liked it. Prince of Stride is literally Free with legs but I liked Free so Stride is pretty cool too. KonoSuba is HILARIOUS; Darkness kills me every time with her masochistic behaviour. Oh man, Shouwa is so good! I'm so glad I picked this up on a whim, really love drama and character interactions in that series. The rakugo is pretty funny too.

Life has been quite alright, these holidays have been quite chill although I got my wisdom teeth removed last week which honestly wasn't too bad for the most part. Going back to university in about a week though, that's gonna be fun. n_n How about you?

Man, I honestly had no idea what the conversation was about with 'Aki' and 'Kai'. It took me a while to realise it was Robotics;Notes. I personally enjoyed that anime a lot but the last few episodes could've been a lot better.

I'm watching quite a number of shows this season but the standouts to me are Erased, Dimension W, Ajin & Grimgar. Although, I have the sudden urge to check out The iDOLM@STER Cinderella Girls anime after seeing lots of pics of Shiburin. xD I see that you almost 100 anime on your currently watching list though, hot damn! What are your favourites this season?
All Comments