According to an upcoming issue of Young Magazine, manga "Initial D" will end in issue 35 which will be released on July 29th. The manga started serialization in 1995 and has been running for 18 years. So far, 46 volumes of the manga have been published. The series was adapted into a TV anime in 1998. Since then, 5 seasons, 5 OVAs, 1 anime movie, and 1 live-action movie have been made. The fifth season completed broadcasting this May.

Please note: The original source for this news post was an image found on the Japanese site, amaebi.net. Unfortunately, it seems someone decided to blur the image prior to its arrival on amaebi and, unbeknownst to our news moderators, this tampered with a watermark added to the image. Obviously, we do not agree with such doctoring of images and certainly did not mean to discredit ANN in any way. Thus, the source has now been modified to give credit where it is due.

Might be enough? I am curious about how it will end. :)

Yaana said:
IntroverTurtle said:
What the hell is he going to do with the ending. Will anything be cleared up.

I doubt the author would not make a proper ending after 18 years of work..

Well it's still in the last battle that the anime ended on and he's got like less than a month to wrap it up. So like 4 chapters to conclude everything.

IntroverTurtle said:
What the hell is he going to do with the ending. Will anything be cleared up.

I doubt the author would not make a proper ending after 18 years of work..

Personally, i just can't feel like it's really the ending it should have. I mean, yeah, it's been 18 years, it's had its glory days.. but as one of those who can't get access to the raw material and actually understand japanese, i feel it's sad there's only one group scanlating this series, and even more, that their translations are a bit crappy (no offense though, I appreciate Wek Manga's work, but some of the latest chapters felt odd when reading. Club Carisma translations were way better)

Also, am I the only one that noticed each chapter is only 9 pages long? Ever since I noticed this drop in the page ammount i feared it was close to being canceled for lack of sell/popularity. Also it was a pain to wait for each chapter and have only 9 pages of it.. Even the last race Keisuke was in was boring to read, maybe in a volume it would feel that way, but the chapter alone felt like a waste of the few precious pages it got.

I honestly can't feel satisfied with this kind of ending for such a great series, also i've heard this week's chapter was the last? Keisuke's race was a painful 20 chapters or so long, and Takumi only gets one? I really hope i'm mistaken and it's just Wek manga being behind with the releases.. EDIT: Yeah, it seems WekManga has just started volume 46, that's a relief for me.

symbv said:
The biggest find in the last chapter

So the D in Initial-D means Dream !!! 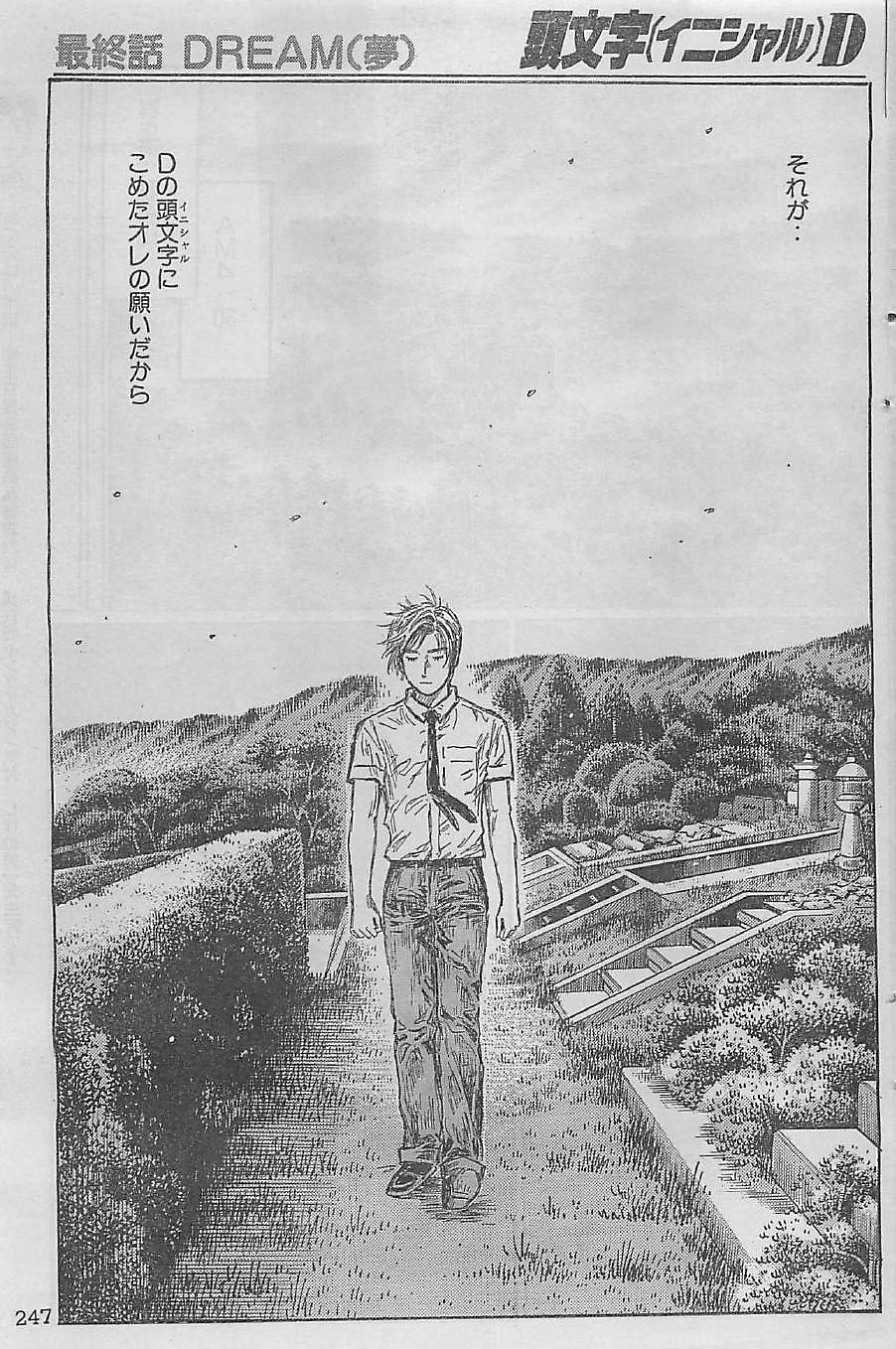 Now I hope that the "Will of D" don't means Dream or Dreamer...
or people will say that Oda copied Initial-D ¬¬

The biggest find in the last chapter

So the D in Initial-D means Dream !!!

So many mangas are ending this year alright :S

Pessoa said:
Nidhoeggr said:
No more running in the 90s...
One Piece, since 1997
I think you completely missed the point.

What the hell is he going to do with the ending. Will anything be cleared up.

icantfeelmyarms said:
Only 46 volumes in 18 years? Slow-ass publishing.
It has 719 chapters, you know.

That's about 1 volume every 4.5 months. Far from slow.

SazKosh said:
Will we finally be able to learn the meaning of "D" in project D?

I always thought it was Project Drive.

Zhou said:
Another one bites the dust.

I've read that the story was heading towards the end but still, it's unbelievable how many long running manga are ending this year/have already ended.

But Berserk will still continue!

Damn there is so much manga ending in this year O_o

While not a fan, 18 years is impressive I must say.

broodo said:
Nickienator said:
How far along in manga volumes is the anime adaption?
I think there's enough left in the manga for Stage 6 to be a movie like Stage 3 was.
It would only have the Takumi vs. Shinji battle & whatever ending is written.]

Ah, thank you. So Fifth Stage ended at 14 episodes because they got too close to the source material?

But good to know they are this close, hopefully it won't be too long before an anime OVA/movie for the end then.

I actually laughed out loud when I read the title of the topic. Anyone wants to place bets what will end next?