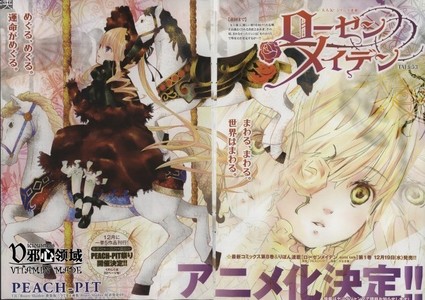 According to Young Jump magazine, a new anime of manga "Rozen Maiden" was announced. Two seasons of the TV anime were aired between 2004 and 2006.

Vergil1913 said:
Does anyone know for sure if this is a Sequel or a "remake/reboot/whatsoever"?
I haven't watched any of the other seasons and this does look interesting :P
It animated the second part of the manga and it used the first episode to cover the first part (which means it is very rushed). There is not really a need to watch the first 2 seasons because those past seasons contain a lot of anime original contents that changes the manga and this season is based on the story development in the manga not the previous anime seasons.

Does anyone know for sure if this is a Sequel or a "remake/reboot/whatsoever"?
I haven't watched any of the other seasons and this does look interesting :P

Funny. I just watched the Sankarea OVA earlier today but news regarding the ED song:
http://www.animenewsnetwork.com/interest/2013-06-01/sankarea-annabel-sings-new-rozen-maiden-ending

Foolery_Fairy said:
Does anybody know the release date??

Does anybody know the release date??

Can someone tell me some newely 2013 animes

Is there a new doll desu?

Probably, will this follow the second manga of Rozen Maiden? Where there's Jun growned up?

Vario said:
Shih said:
Wonder if it'll be a remake or 3rd season.
Yeah. Hope for it, too.
But 3rd season is much better than remake anyway :)

I agree. I hope it follows Peach-Pit's manga storyline ^^

this is good news DESU :D:D:D:D

<3 bring on the sequels (ending was terribly done -_-)

watch this link to see is to believe

When will more news be released?
I have waited so long for this.