Manga 'To Love-ru Darkness' To Be Animated [Official] 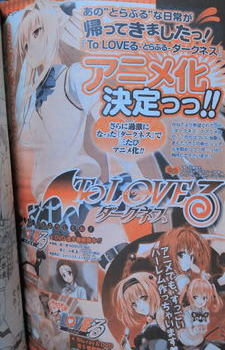 According to Jump Square magazine, manga To LOVE-Ru Darkness was announced to get an anime adaptation.

According to Anime!Anime!, it will be a TV series. The type of the anime hasn't been announced yet. Anime!Anime! has apologized for reporting wrong information.

Kinda soon considering that the manga only has like 20 chapters.
Never the less, i'm really looking forward to it! :)

jmal said:
If you're reading TLR, in any form, for the plot, you're reallllly looking in the wrong place.
Actually, I'm not reading TLR for the plot I read for the plot. Period.
Okay, not necessarily but if you don't have a plot, you should have something entertaining in its place. Like comedy, for example. Besides if you're not going to have a plot, why announce in the first chapter(s) that there's going to be a huge plot? That pissed me off.

Okay, I do know de gustibus non est disputandum, but... Damn, is that series dumb. And I think it may actually be dangerous in it's own way. But yeah, as I said above - if you enjoy it, keep doing that.

This is so wrong.

To-Love Ru manga was okay and even though it was boring and predictable and plotless, it did have some interesting ideas in it at times.

I have no idea how they got an anime. I mean, kids are going to watch that, you know? Getting all the chicks just for touching them all over? Creating a harem? This is messed up badly just like all those incest things out there.

BTW - Don't flame me, I respect your opinions - if you like it, good for you, I guess. Just wanted to give my three cents, maybe for you to think about for two seconds if you so wish.

And one more thing: the art IS BEAUTIFUL. That makes me even angrier at the artist though. Such a waste, 'cause for all your incredibly typical shounenness Black Cat was, I really enjoyed the manga.

Epic. Darkness has been noticeably better than everything previous imo. This seriously needs to have the harem ending with Yuuki as the new emperor of the galaxy too lol

Recent chapters in the manga have sort of let the story drop off to the side which kind of bothers me. Part of the reason i thought Darkness was doing so well is it seemed to be more on track story wise. Hopefully we get plenty of story to go with the ecchi when the anime hits.

Either way Momo has always been win as far as all the girls go and i can't wait for her to step up to the female lead position. Lala is just too brainless and ditzy. Momo on the other hand is smart, conniving and interesting. Even if Yuuki weren't up to the task of being emperor he could do it with her backing him.

RyanSaotome said:
Game_Master said:
Good, now we don't have to worry about censors (much)
and it was obvious that it'll be an OVA. Current material can hardly make a 4 eps anime.

What? Its got 18 (and likely 24) monthly chapters by the time it comes out. You can easily do 2 chapters with smartly added filler per episode.

I think it's silly that people are saying that there isn't enough content out yet in the manga to adapt TLRD. I think that you could get an easy 17 episodes out of what has already been released without even having to add much or any filler. Trouble quest in the manga ran 6 20 page chapters and TLRD averages 40pages a chapter. I think you can safely say that they cut Trouble Quest up into a third of what it was in the manga, so that comes out fairly closely to one episode being able to be made from 40 pages of manga.
That aside, I also think it's a <i>good</i> thing that they are adapting it into an anime early, rather than way late like they did with the first season (not including that I think they may actually be adapting it ~10 chapters too early, give or take :)). With the manga being this early on, they are restricted to add "filler" (if you want to call it that, I don't). Meaning, they will be able to, or may be forced to, go at a much slower pace, adapting more important points from the manga than they did in the first season. They won't be forced to try and rush the anime to catch up with the manga (which they really weren't in the first place--dumb) like they did before. TLR really has no point other than to enjoy the characters interacting in all the random scenarios they are thrown in, and I think that's something they didn't realize at all when adapting the first season.
I'm glad to see that other people are also saying that the manga was much better than the anime because even though I've only finished the first season and the OVA, that's what I think too.
I think with the scope of a one season, 26 episode, anime adaptation to cover most of the TLR manga that was out at the time, the series was as good as it could have been. The thing that I loved most about the manga TLR was that you got to see the characters have fun and develop, but that isn't really possible in only one season of anime.
I think the idea to stray from the manga was commendable, because there wasn't much you can do while trying to stay completely true to it while compressing it so dramatically. However, the execution, pacing, whichever, was horrendous in the first season (haven't watched motto yet). The OVA got me excited, but it wasn't enough; too little too late.
Honestly, I don't care if every episode in TLRD is full of filler, or if they 1 to 1 with that manga, it doesn't really matter (although I'd prefer 1 to 1 =]). All that matters is that they don't **** it up like they did with the first season. Whatever they do, they have to do it (well) RIGHT because that's all that matters.

Good News to me :D

I AM SO FUCKING HAPPY!!!! OMFOGMGOGOGMGMOGMOGMOGOMGOM

Am I the only one that's not excited by this, I still don't know what did you guys liked about that anime. There's no real interesting plot, the ecchi aspect is butchered by the beams of light hiding every single thing.Oh and I am also forgetting the terrible ways they ended s1 and s2

I wouldn't get so excited just yet.

It will be nothing but screen flashes on the screen for an entire ep.

Should be more excited for the BDs :p

That picture seems like the most legit one yet... its a scan from Jump SQ, the magazine that runs it. I'm taking that as official confirmation of a TV series.

Yeah, sadly it looks like an OVA instead. Sucks.

Damn :/
Oh well, i'm pretty sure it'll get a TV series later, depending on how well the OVA sells.
Still conflicting reports. Here's one pointing toward TV series.

Hopefully the one saying its a TV series is the one that is correct.It would be fully release and even uncensored released before all the OVAs are released. OVAs tend be released one episode once a month or ounce every two months and sometimes longer assuming there its even a mufti-episode OVA series.

Deardrops said:
RyanSaotome said:
zimno said:
Animeanime replaced it by an article for correction...
they say "not TV series"
...orz

Yeah, sadly it looks like an OVA instead. Sucks.

Damn :/
Oh well, i'm pretty sure it'll get a TV series later, depending on how well the OVA sells.
Still conflicting reports. Here's one pointing toward TV series.

If we get an OVA each month, the more the happier I be, that probably best solution for this series than a TV series...

So, it's going to release as ova, huh. Good to hear.

Game_Master said:
Good, now we don't have to worry about censors (much)
and it was obvious that it'll be an OVA. Current material can hardly make a 4 eps anime.

What? Its got 18 (and likely 24) monthly chapters by the time it comes out. You can easily do 2 chapters with smartly added filler per episode.

Good, now we don't have to worry about censors (much)
and it was obvious that it'll be an OVA. Current material can hardly make a 4 eps anime.