Kurosaki Ichigo, the main character of the popular anime series Bleach, has been in a ton of battles. But which fight was the biggest turning point for the character? What made Ichigo who he is today? Let's find out!

In every anime and manga there is a moment, a point in the series that defines not only the story, but the main hero that drives the story along. For many viewers that would be the first episode and no doubt as a mangaka that's exactly what you want. You want your audience to be captivated by your world and the concept you've created. Bleach already had a great premise: Shinigami making souls rest and doling out punishment to evil spirits known as hollows. But there was a turning point in the series that ensured that fans would stay on the ride until the very end.

Now, with most shounen series it's a no brainer to say battles are everything, the glue that holds things together as well as the spark that lights the curiosity within the reader. Bleach has done a great job of having fights and battles that kept fans tuning in from week to week wondering how their hero would come out on top. Despite the obvious entertainment value of fights, the battles in Bleach have done a great job at revealing characters as well. I talked about turning points for a story and no doubt the big turning point for Bleach was main character Kurosaki Ichigo's first and second encounter with Abarai Renji. 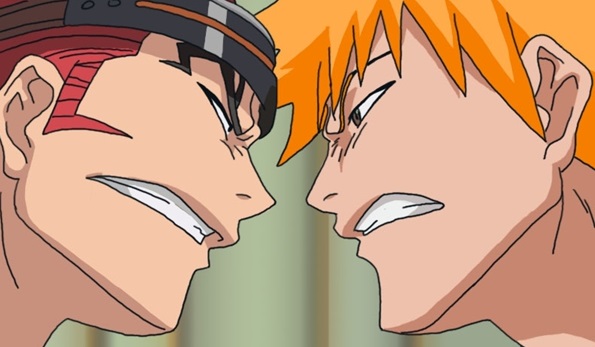 The first fight was tense and left you on the edge of your seat, wondering if Ichigo could stop two powerful Shinigami from taking his new found friend Kuchiki Rukia back to Soul Society to be punished for her crimes. It was all the setup you needed and it gave viewers an emotional thread to hang on to. The bond of friendship that Ichigo and Rukia had formed to that point made the stakes pretty high in this pivotal battle. It made the fight important not just for the characters, but for the fans, as well, that had watched Ichigo and Rukia go from complete strangers to the best of friends. 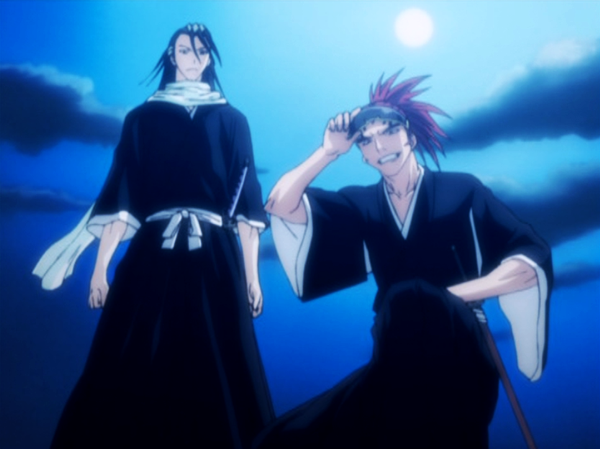 In Ichigo's first bout with Renji we saw that not only was the substitute Shinigami under-trained, but he was over-matched as well. The Captain and Lieutenants of the Gotei 13 had yet to be mentioned in the story at the time, and with the appearance of both Renji and his superior Kuchiki Byakuya, the audience was introduced to a new kind of danger that not even the hollows posed.

Hollows were more menacing than anything else, but for the most part they lacked the battle prowess of the other Shinigami. When the fight got underway, it was pretty obvious that Ichigo was outgunned and things didn't get any better as he progressed. The fight with Renji highlighted the fact that Ichigo didn't even know the name of his Zanpakuto, which more or less meant he was facing certain defeat. 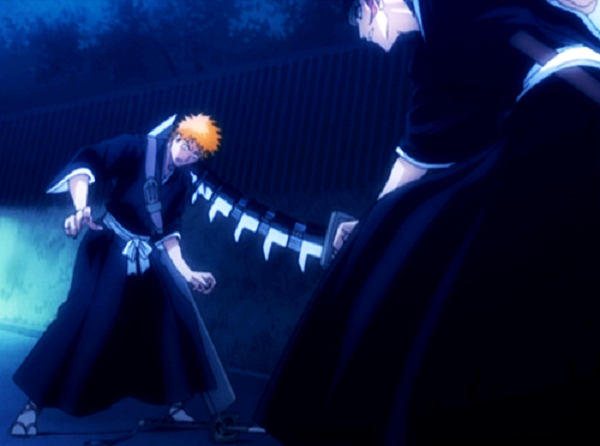 But despite that drawback, Ichigo was able to use his guts and determination to at least trouble Renji in the fight. There's no doubt that Kurosaki's best weapon is his will to win and protect his friends. But all of that meant nothing once Byakuya entered the fray and took Ichigo out with extreme ease. The defeat would be the turning point of not only the series, but Ichigo's character as well. 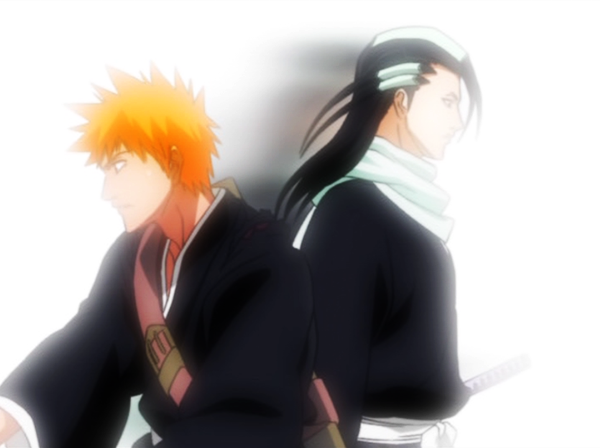 Once Rukia was taken back to Soul Society, it meant things were going to change in a major way. It meant that Ichigo would have to get stronger if he ever hoped to save his friend. The loss to Renji and Byakuya pushed him to new heights. He received the necessary training from Kisuke Urahara, which meant a trial by fire. Urahara doesn't go easy on him and that fact in itself shows how persistent Ichigo is about improving his skills. Sure he's scared and unsure of himself, but it's those flaws that make Ichigo improve in the end. After finally learning the name of his Zanpakuto, Zangetsu, the opportunity for not only revenge, but saving Rukia presents itself. 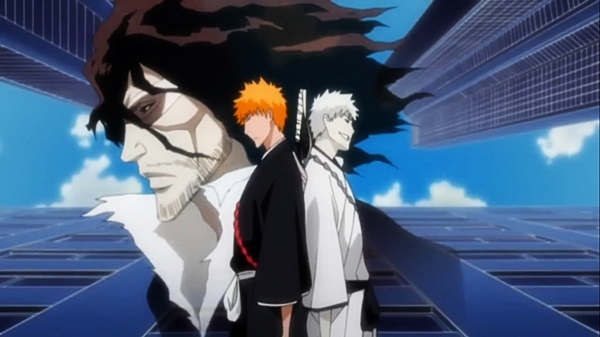 Fast forward some time and Ichigo enters Soul Society by force, takes on a pretty powerful lieutenant in Madarame Ikkaku, and once again finds himself face to face with Abarai Renji. By this point in the story, this fight seems destined to continue. Renji isn't all bad and still cares for Rukia, but his devotion to his duty clouds his judgment greatly. It's in this second fight that Ichigo's most powerful ability comes to the forefront.

Manga and anime are legendary for seeing characters convert from evil to good, as well as the other way around. In the shounen genre that means that characters are going to have to beat the crap out of each other before any real change can occur and Bleach is no different. The battles Ichigo has with Abarai Renji aren't merely for entertainment value, but serve a greater purpose to the story and the characters.

The rematch is a brutal, bloody affair that sees both men taking severe damage in the process. We've already learned before this battle that lieutenants are extremely powerful, yet Ichigo more than holds his own against Renji. When the two lock swords, Ichigo is able to force the lieutenant back and shows that he's improved immensely since their first battle. 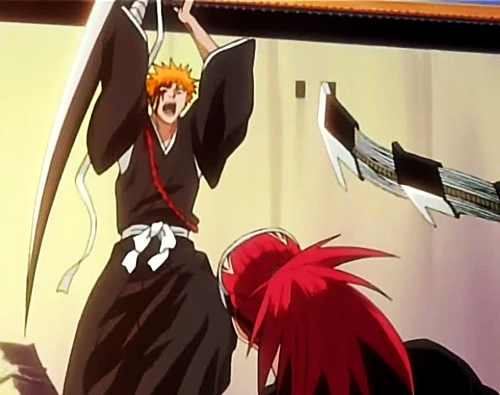 Through clashing swords, the two learn more about each other and gain a certain respect for each other, even if it's not mentioned. Ichigo feels guilty for taking Rukia's powers and feels compelled to free his friend, while Renji blames Ichigo for putting her in that position in the first place.

After a tough back-and-forth battle, Ichigo uses all his power and training to defeat Renji with a well place slash through the chest. Defeated, Renji acknowledges his true feelings and explains that though he may want to save Rukia himself, he finds it impossible. In this, Ichigo's true power is unveiled. He forces others to confront themselves, to dig deep and acknowledge the braver, more courageous side of their psyche.

Sure this has happened with Uryuu Ishida as well, but he was never considered a major opposing force. Renji was a different story which makes his change so much more profound. He was on the entirely other side of the argument. 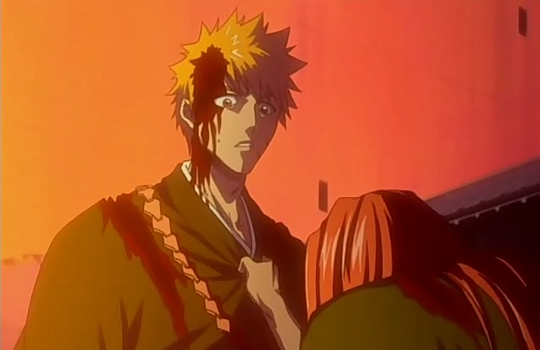 With every victory he collects, Ichigo makes his opponents better, helping them discover a side of themselves they had kept locked away. Through loss, Kurosaki Ichigo changed himself. Through battle, he changed Abarai Renji. Ichigo changes people for the better. With all the otherworldly powers present in Bleach, it's the only one that he can lay claim to.