Dear Sword Art Online fan: admit it. From the very first episode of the anime, you fell in love with the world that Reki Kawahara created. You were as passionate about the experience of logging into the game as those players in the game were. You imagined yourself donning a NerveGear virtual reality headset and stepping lithely into this expansive, beautiful game. You wanted to explore it just as badly as Kirito. “Who cares if it turns into a death game?” you thought to yourself. “I’d totally do it. And I’d survive.”

Sword Art Online has that kind of effect on an MMO player who watches the anime. We put ourselves in the shoes of the main character, and feel nothing if not a significant amount of jealousy that we couldn’t be in the game, mastering sword skills, taking down bosses and player killers, and meeting the girl (or guy) of our dreams. And that’s what makes Sword Art Online so interesting. Between the two games of the first and second season (including Gun Gale Online, despite it being a first person shooter), we’re immersed into games that have heavy MMORPG elements, all of which we are intimately familiar with, and which we have come to love in some of the best MMOs out there.

Whether you’re an MMO fan who has never had the chance to dig into Sword Art Online, or you’re simply reflecting on the anime in preparation for the 3rd season, here are some of the most recognizable massively multiplayer online elements that exist in the show. 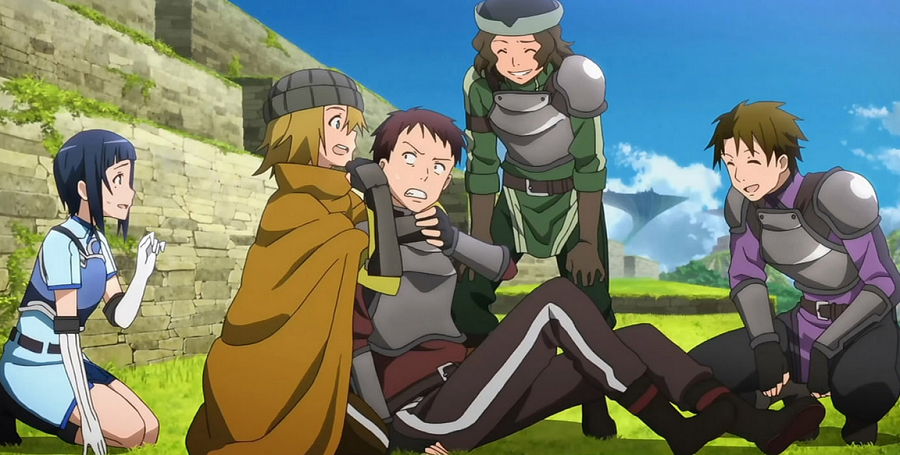 Parties and guilds (or clans) are something that any role playing game fan will be familiar with, and any MMO fan will be even more directly familiar with. Most MMOs, whether they are role playing games, shooters or otherwise, typically have some kind of system where players can join together in the same group, ranging from smaller and more activity-related parties, to larger and more organized guilds or clans. All of these games give players the option to never group up at all. The concept of joining a party is something that is dealt with heavily in Sword Art Online, and is an action that in itself carries very significant symbolic meaning. 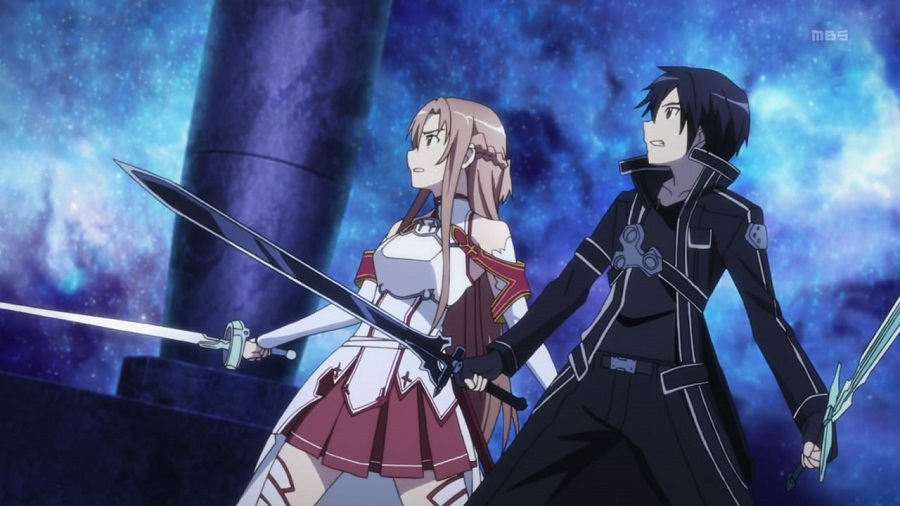 In the story, Kirito, our main character, spends most of his time alone. During the first half of season one, he’s anti-party. He believes only in himself, in saving only himself. This only intensifies after the first guild that joins gets demolished in a dungeon, further solidifying in his mind that parties and guilds are a bad thing. When you’re in a party, you are not only responsible for yourself, but for those who you have joined together with. Their success is your success. You rise and fall together. You live and die together. Parties and guilds are a central part of most MMOs, and for Sword Art Online, they continuously play an important role in how the characters perceive themselves in relation to the game and to each other. While Kirito ultimately joins parties and a guild, even those actions are at first out of necessity. Yet even he comes to understand the importance of living for more than just himself. And in a game where death in the game means death in life, Kirito takes that responsibility on his shoulders, viewing everyone left alive as one big party, one giant guild full of SAO players, all of whom he alone must save from destruction.

It’s My Job to be Skilled 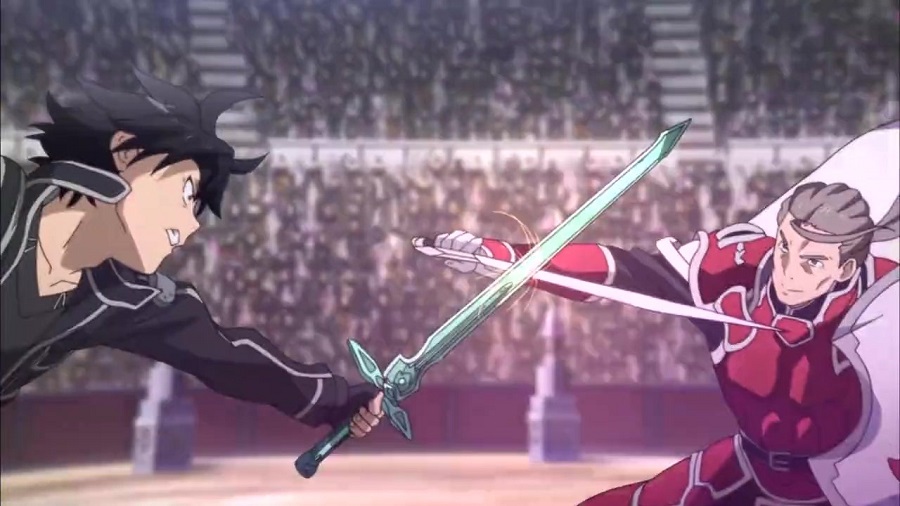 Most MMOs are all about the acquisition of new and better skills. All of these skills usually require some form of quest to unlock or activate, or at the very least, lots of time and effort put into the game in order to hone it and make it better. For Sword Art Online, there are no clearly defined number of skills, but there are many different jobs or roles in which players can develop skills to higher levels. On the obvious side, there are the sword skills (hence the name of the game, Sword Art). The sword skills apply across the different hand-weapons that players can use. Although swords rule the day, axes and spears are used by some players. Yet players can also hone skills in other areas: fishing, cooking, blacksmithing. 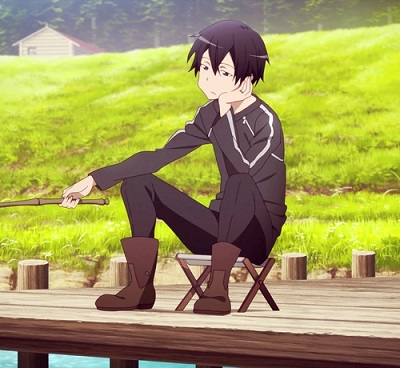 These are very typical and recognizable skills for MMORPGs. In most of these games, players must choose a job upon creating the character, and that job defines who your character is and what role you play in the game. This becomes especially important for characters later down the road who do join guilds and parties. Sword skills play a much larger role in Sword Art Online than job skills do. However, the most intimate moments in the anime all focus on how these players, who were stuck in the game for two years, have developed lives that involve the job skills. There’s Asuna’s amazing cooking. There’s Silica’s unmatchable blacksmithing. There’s Agil’s shrewd merchant skills. There’s Klein’s… well, not every character spent their two years in the game doing something useful outside of fighting. But you get the point. The non-fighting skills players developed helped them cope with their new reality, but also reflects the reality that exists in many MMOs, especially MMORPGs. The game is often about more than just fighting monsters and leveling up. It becomes an escape, and a chance to develop a life beyond the real world. 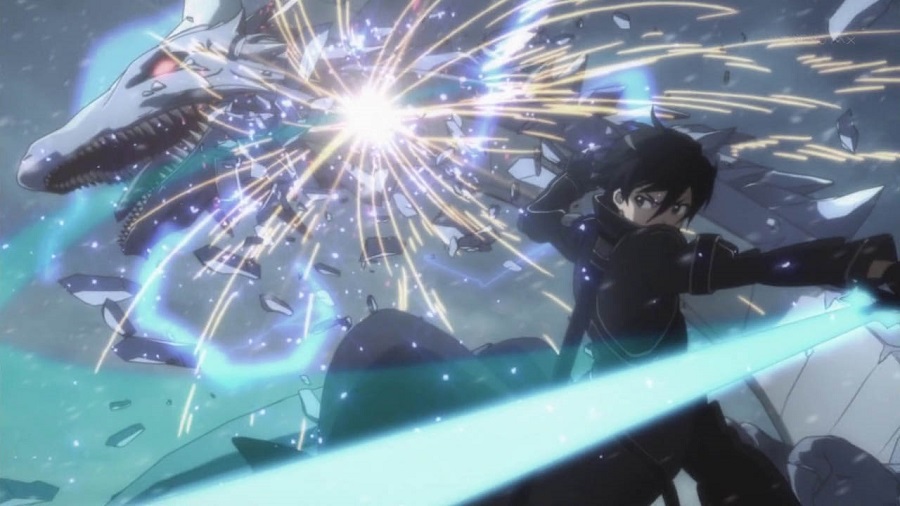 As most MMO players know, it’s not a real MMO if there’s no opportunity to take down some insanely huge, crazily powerful bosses and score some sweet, sweet loot in the process. The structure of Sword Art Online is centered around this very idea. However, for the players in the game, the process of killing bosses and scoring loot is all about survival. When the death game begins, everyone is on the first floor of a 100 floor tower. To end the game, they must clear each floor of the bosses, a task that becomes increasingly difficult. As with any MMO, this requires partying up with friends and guild members, and conducting raids on the boss’s room. Your typical MMO will require players to move through a series of dungeons or playable areas, taking down enemies one by one in order to reach the boss of that level. This is only partially true for Sword Art Online. It is more true when the anime switches over to Alfheim halfway through the first season. It is not particularly true of the original game which bears the series’ title. However, almost all MMOs focus on these boss fights, and the coordination and learning curve that they require. They are not fights designed for everyone, and the harder the boss, the more people required to take him down. All of SAOs boss fights are ones that involve dozens of players, many of whom die in the process. And as with any MMO, some players simply never reach the skill level required to take these bosses down, whether they’re alone or in a party with others. 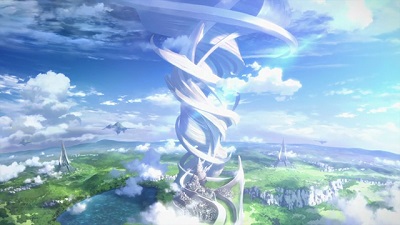 Every MMO, from the big to the small, is all about escapism. Getting out of our real world and into a world that has rules of its own. We play MMOs as a means to experience a world that we wish could be possible, that we wish we could live in, but that is only possible in the world of a video game. Sword Art Online is just such a world, for the viewer and for the players in the game. The only difficulty for the players in the anime is that it is a world that offers no easy escape. What was to be an exciting escape from real life became a horrific, living reality. Yet the world created for Sword Art, Alfheim and Gun Gale are all massively different from the world that we live in. Each has fantastic elements that draw the players in, keeping them coming back for more. MMos are all about the exploration. A good MMO will seem boundless, and it should feel that way. MMO players want nooks and crannies that exist that they can say only they have seen. They want dungeons upon dungeons with secrets that take years to discover and long message board chains to find. The MMOs in Sword Art Online stir our imagination in that sense, and certainly provide these fantastical worlds for the players in the anime.

The whole “death game” part aside, Sword Art Online is quite likely one of the most interesting MMOs created. Sadly, it’s not one we can actually play. Fans of the show can still immerse themselves in real MMORPG worlds, such as Guild Wars, Ragnarok Online and Tera Online. Series creator Reki Kawahara took the best of what many of these well known MMOs have to offer, giving viewers the feeling that Sword Art Online is not just something we watch, but something we could conceivably play as well.