Sword Art Online’s title is admittedly a bit misleading. While the anime begins with characters immersed (or trapped?) inside the titular “Sword Art Online” game, by the halfway point of season 1, the characters have already escaped this game and the main character, Kirito, has moved on to a second game: ALfheim online. This might cause some confusion for those who picked up the anime halfway through the first season, or even began watching during season 2 without going all the way back to the beginning. However, Sword Art Online as a game is the literal beginning for the whole series, with each new game introduced in the series providing a deeper and more varied look into the very lively worlds that make up MMO genres. Within the first two seasons we are given two specific MMO games in the fantasy RPF genre: Sword Art Online and ALfheim Online.

The very exciting, forward-thinking aspect of Sword Art Online is its application of virtual reality. This should be very familiar to fans of .hack//Sign. The anime cycles between two different virtual reality headsets: NerveGear and AmuSphere. The NerveGear headset works by connecting directly into a user’s mind using microwave transceivers. These transceivers probe the user’s mind, interacting with all five of their senses and completely taking over those senses. Users are immersed into the game through the headset. Ostensibly, there should be safeguards to prevent death. However, when the Sword Art Online game officially begins, the primary creator of the game, Kayaba Akihiko, traps the players in the game. If players die in the game, the headset sends out an intense electromagnetic pulse that ultimately destroys the players’ brains. Likewise, attempts to remove the headset or disconnect the power supply outside of the game will end in the same result.

The AmuSphere headset developed by RECT Inc., the company that bought Argus (the company that developed NerveGear), was the second generation of the NerveGear headset with safeguards in place to prevent the same tragedy that occurred with the original NerveGear headset. Regardless, the technology works almost entirely the same. Players are immersed into the game world through the headset, which takes over their five senses and allow them to fully experience the game world as if it were indeed real. 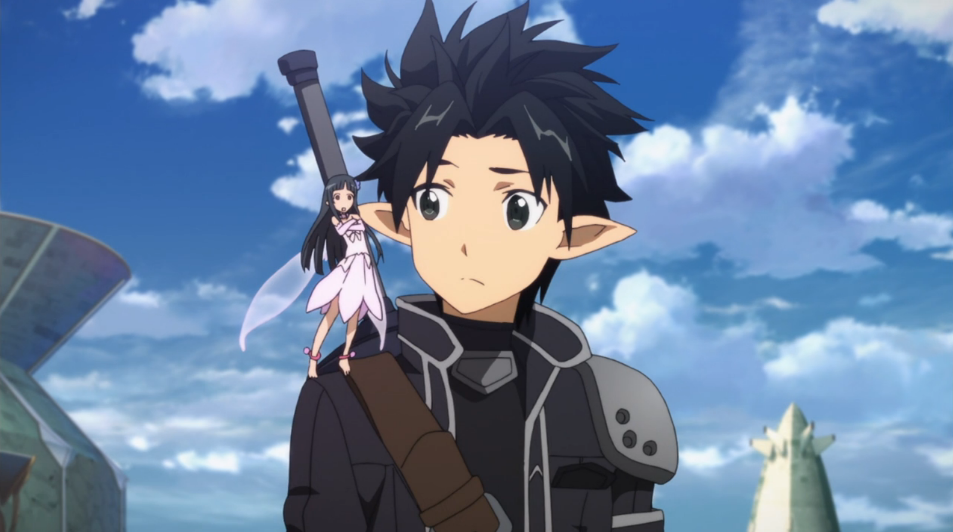 As the game that gives the series its name, Sword Art Online is ultimately the most important. While the main characters eventually beat and move past this game by the first half of the first season, their experiences within it never actually leave them. This is why the series can still hold on to the name despite the majority of it occurring within different games. 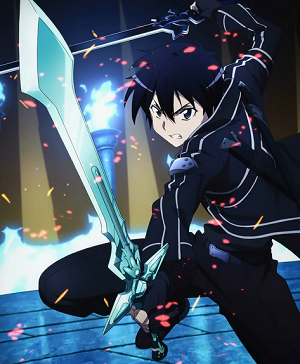 Sword Art Online as a game is heavily focused on sword skills. Unlike many fantasy games, there is no magic. This might surprise those who first start watching the anime expecting there to be magic skills that coincide with the sword skills. However, Sword Art Online focuses entirely on the development of individual player skills with handheld weapons. While most players in the game prefer to use swords of various types, axes and spears are also an option. Shields are also available for players to use, yet most players avoid using them for stylistic reasons (after all, they definitely detract from the cool, solo- or dual-sword look). What makes Sword Art Online unique among other games is that there are a seemingly infinite number of sword skills. Players are only limited by their individual strength and imagination. This is why only one character in the game, Kirito, ever developed the dual-wielding sword skill. Due to the nature of the game’s skills development, a keen amount of jealousy develops in-game among players. As the series starts, we find that some players in the game, beta testers, had a head start on developing skills and learning where the best quests and hunting grounds were. This head start creates an immense amount of hatred toward the beta testers from the other players. Indeed, the new players even blamed the beta testers for the deaths of the players early on.

Items, quests, leveling and skills are essential parts of the Sword Art Online game, which is classified as a dungeon crawler. The goal of the game is for players to reach the top of the dungeon tower in order to take out the game master and be freed from the game. For those familiar with the story line, death in the game means death in real life. The stakes in SAO are much higher than in any MMORPG that exists. Had it not been for this horrifying fact, the game could have been a big hit. As it stands, the game dissolves as soon as Kirito defeats the game master and saves the remaining few thousand who did not die during their 2 year trial within the game. 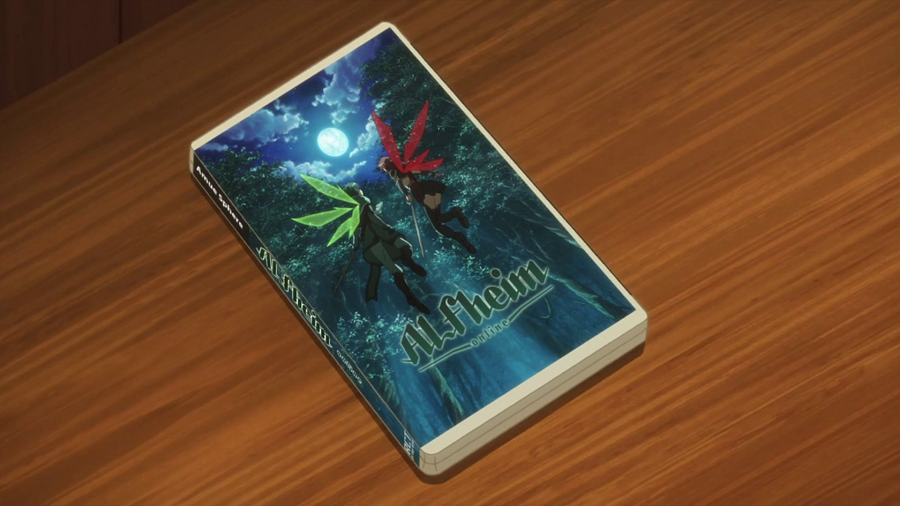 Much like Sword Art Online, ALfheim online is a fantasy RPG that requires the virtual reality headsets particular to the anime. Unlike Sword Art Online, which utilizes the dangerous NerveGear headset, ALfheim uses the much safer AmuSphere headset from RECT, Inc. Viewers of the anime learn that the game engine for ALfheim is built on the same engine that ran Sword Art Online. The online differences that exist are in the items, race systems, and the implementation of magic skills as well as flying. 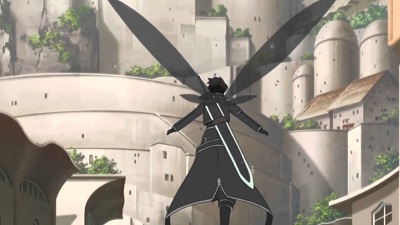 Despite being built upon the same game engine, ALfheim completely sheds the leveling system. Instead, the game is based purely on individual player talent and ability. Player strength in the game is based directly on player strength in the real world. This means that theoretically, if a player builds their strength, stamina and intellect significantly outside of the game, he/she would be able to become a top player in the game. It’s for this reason that Kirito is able to pick up the game and become a top player within only a few days of playing. Indeed, he even goes as far as defeating the highly renowned top player in their first and only fight. Two years immersed in the life-or-death game of Sword Art Online turned Kirito into a player with not only immense talent, but an unbeatable will to win.

ALfheim Online introduces the magic skills that were missing from Sword Art Online. The true difficulty here? A player’s magic ability is limited only by their ability to actually remember the skills. The easy magic skills are all incantations that players must remember the words for, with hard spells reaching as many as 20 individual words that players must remember. There are no drop-down menus for these magic spells, making the difficulty level intense, especially for new players. The magic that players can learn is fully dependent on their race. Players choose between 1 of 8 different fairy races, each with its own capital city. 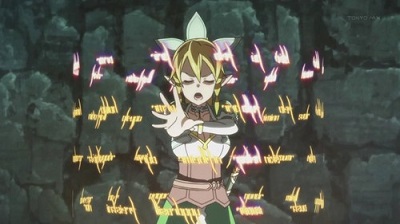 In-game, these races are at war. Similar to Sword Art Online, the goal is to reach the top of a tower. In the case of ALfheim, that tower is a massive, life-giving tree. ALfheim Online is based on medieval Renaissance mythology and borrows heavily from Shakespeare’s A Midsummer’s Night Dream. The figureheads of the game’s world, Oberon and Titania, are both fairies that play a significant role Shakespeare’s play. One of the primary goals for the different races in the game is to attain a blessing from Oberon and Titania. The first race to reach the top of the tree will be granted the ability to fly without limitation.

More than with Sword Art Online, ALfheim is a significant escape for the individuals who play the game. Those who immerse themselves in the game, such as Kirito’s younger sister Suguha, completely give themselves over to the game. Much as with many MMOs, the game’s world becomes as realistic and active as real life. For ALfheim, the politics that exist between the different races plays a major role in how different players act toward each other. 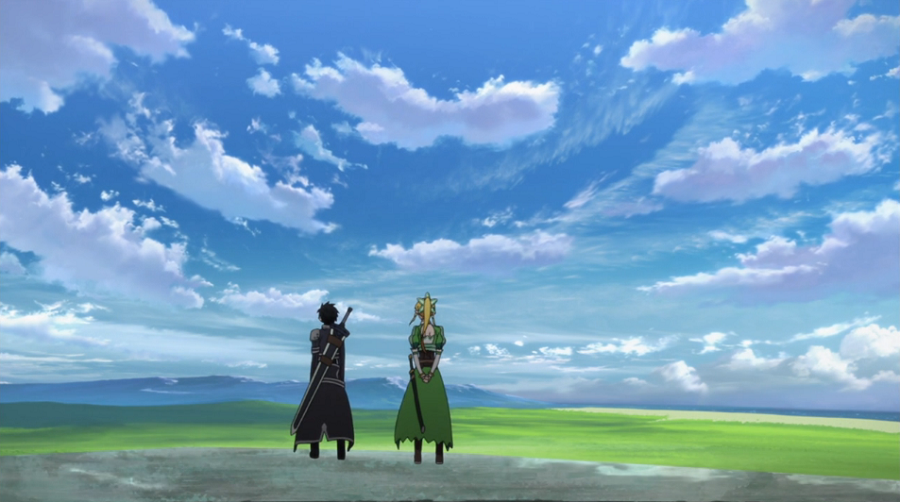 Both fantasy worlds that exist in the first season of Sword Art Online reflect MMORPG experiences that many gamers will be immediately familiar with. Indeed, both games provide an experience that many could say they wish game developers would hurry up and implement. The idea of being able to fully immerse ourselves in a virtual reality game is exciting enough, but doing so in an MMORPG provides an exciting new level of freedom to your standard desktop or console gaming experience. So, get on with it, game developers. Make the Sword Art Online experience our reality! Just, no real deaths, please!