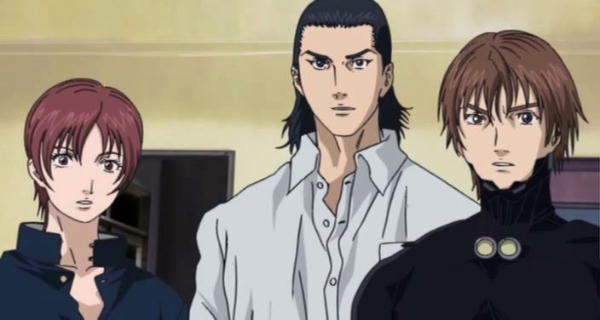 Gantz is a fast-paced, action and gore filled anime, and the Gantz opening is no different. The OP features the song “Super Shooter” by Rip Slyme, which is fitting for the anime style and feel thanks to its adrenaline-pumping beat.

As the red Gantz title screen appears, the grungy music teases with starts and stops. The visuals zoom into the world, the area, the city, and finally an empty room with mysterious black ball - and the music begins in earnest.

It starts off with the English words: “now listen yo people put your guns up,” and we’re off on a beat heavy rap intro. If you listen to the lyrics, the song isn’t just thrown together with the anime because it sounds cool (which, admittedly, it does). Instead the lyrics seem to be telling the Gantz story, talking about survival, death, guns, and the fact that “we are the borrowed item of a noble god.”

As the song plays, the main characters make their appearance one by one, through scenes from the anime. 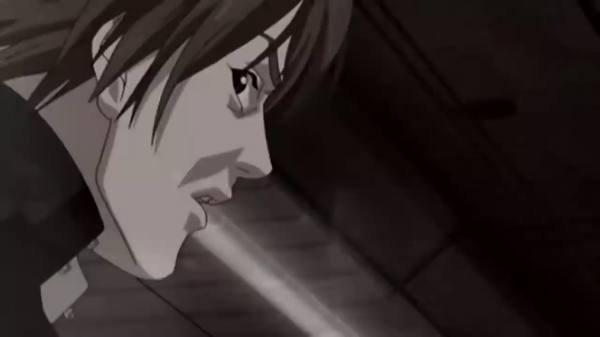 First up is our reluctant hero, Kei Kurono. He literally slides into action in the Gantz OP, and takes off running while looking back over his shoulder. No matter what the situation, he’s always running and has a perpetually bewildered look on his face.

The next character to make an appearance is Masaru Katou, who in contrast to Kurono, is first seen smiling. He does a bit of his own running, but he’s also shown speaking seriously, reacting in horror to blood splattered on his face, and displaying rage and then a kind expression. 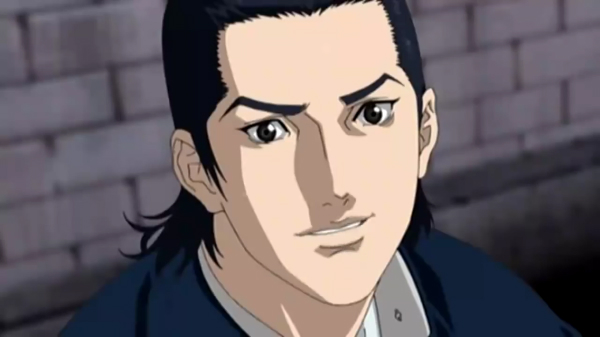 Even if you’ve never watched the Gantz anime, the guys’ personalities are easy to determine. Kurono is unable or unwilling to face the situation and his issues, while Katou is sincere and earnest, taking things head-on.

Following Katou we have Kei Kishimoto - and it’s pretty clear exactly what she is in the series. When she isn’t appearing naked and half formed (literally - half her head is missing), she’s being cute and girly. 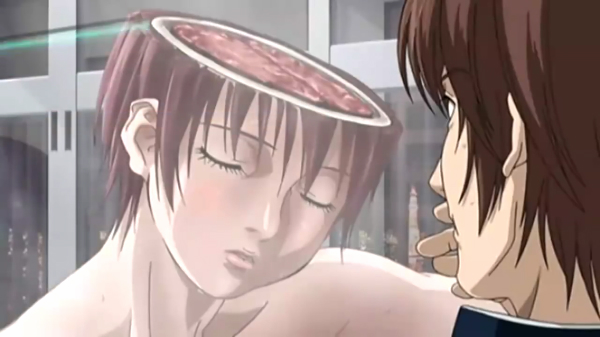 Most of the character scenes at this stage are displayed in black and white, with only subdued colors showing up when introducing a character. And then there’s Jouichirou Nishi, whose intro is shorter than the others’ and completely devoid of color. He’s shown yelling and getting ready to shoot. All business, no nonsense here. 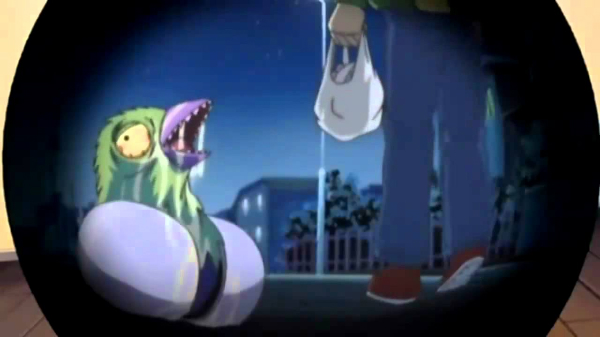 Of course, the last character to get a formal intro is the Gantz itself, the mysterious black ball that was seen in the beginning. Using the Gantz as almost a crystal ball, we see a series of monsters and atrocities, a sort of through the Gantz as a lens view of what’s to come.

The final part of the Gantz opening has full color, and shows each character in his black skin-tight Gantz outfits. Katou gets a tiny moment looking determined, Kishimoto gets a full body sweep looking sultry, and Kurono is, as always, looking over his shoulder.

As the song becomes more lyrical, the final moments of the opening play out. The bodysuits are given a moment of their own, offering a sneak peek at their capabilities, and then it’s back to the empty room with the Gantz. Look inside as our three main heroes strike a pose, and the song comes to an end.

We’re left with the final repeated words of Rip Slyme’s song: “Big shooter living fast and blazing beat you up, you need like a break.”