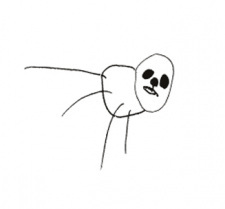 A similar college life story structure. The plot's are pretty simplistic but that's ok because what Honey & Clover & Maison Ikkoku both have is strong character writing, althoughe Honey & Clover has more main characters that it gives individual focus to than Maison does. Nevertheless, both of them are down to earth stories about adults trying to make it in their lives and achieve their goals. Both of them also have a similar style of humor, with Honey & Clover's being more eccentric & loud, but Maison's being more tounge & cheek with timing. Overall, if you liked either series, but haven't seen the other, then I highly recommend either of these shows

This is possibly the easiest, & cheapest "recommendation" I could make. But if you were stupid enough to torture yourself by watching this gross filth like I was. Then you should watch Ninja Scroll to remind yourself of what a movie with effort put into it is supposed to look like. I'm not even a big fan of Ninja Scroll either, but I've gained a new-found appreciation for it after watching Sword for fucking Truth

I certainly wobn't be the last person to compare Kare Kano & Evangelion. But the two shows are actually more similar than meets the eye. They share the same director, 'Hideaki Anno", so they share a similar style of cinematography & shot composistion. Kare Kano also contains the studying of human psyche & how it affects the characters in their day to day lives like Eva does. It also has a similar style of music thanks to Shirou Sagisu returnng to do the score. Take this more as me recommending Kare Kano to Eva fans more so than recommending Eva to Kare Kano fans.

Touch is probably the closest thing you're going to get to Maison Ikkoku. It tells a similar story to Maison, & has the same grounded nature of the series to boot. The series also has a similar writing style, in which side characters actually give quite a bit back to the story, & help move the plot along. If you've just finished Maison Ikkoku, & want something similar to it, yet it brings its own flavor, Touch is what you're looking for.