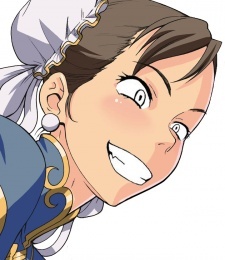 tovabrink May 8, 2011 3:52 PM
I'm not joking - I was looking at window and couldn't believe what I see, pretty blooming trees, green gras and snow falling from the sky. But now it's a bit warmer, thanks God, and I finally can sleep without socks on my feet :P

I think I got lazy because of winter, so bike is good thing, I can move my ass and do something besides chasing my nephew (but it IS pretty tiring :P) And I live in a village, so I have a lot of space to take a nice walks ^^

tovabrink May 4, 2011 2:06 PM
Oh hello :) I'm doing quite fine ^_~ A few days I took my bike from storage room and I decided to improve my poor shape :P Today I met with my cousins and we were playing board games for a long time. And of course I'm watching anime, I want to catch up with One Piece as soon as I can ;)

I so agree with this weather - yesterday it was SNOWING here! In May! Everything started to bloom not long ago and it was so strange. I hope that it will be warmer soon...

tovabrink Apr 14, 2011 3:04 PM
That's very nice of you :) I'm always open to start a conversation, especially with someone nice ;) I guess Elfen Lied and Higurashi are definitely not for me (I saw a bit of first episode of EL and I remember only some chopped-off head... disgusting :P). And for yaoi and yuri I agree, nothing against it, but if I want to watch something homosexual I prefer shounen-ai (I never actually saw any shoujo-ai, I can't really count Maria Holic as one). Characters in awkward situations are almost always good, I think :D
You are right, it somethimes happen, when you watch some series and character seems okay at first, but later you want to get into your pc and kill it with your bare hands :P

tovabrink Apr 13, 2011 12:49 PM
Oh hello :)
Yeah, we indeed have very high compatibility. And it seems that you enjoyed Black Lagoon like I did :)
I really like shounen series, I admit it, but usually I choose which anime to watch completely on a whim. I want to watch series from various genres, as many as I can :) (but I dislike gore, bloody horrors and yaoi/yuri) Anything is good, as long it's interesting and characters are not annoying :D

bateszi Aug 25, 2010 2:19 AM
There's a lot of fan-service, but, for whatever reason, it doesn't really seem out of place in Highschool of the Dead. It's suits the trashy/melodramatic ambience of the whole thing.

There's only one possible answer, errr, reply to this. "OMG ITS DESTINY."
All Comments