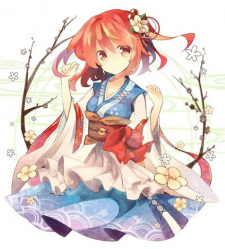 You are right about Shield Hero.
You are very wrong about Re:Zero. It is a 10/10 anime.

You should focus more on writing positive reviews, and have some more appreciation for the limits of your taste. Much of your criticism could be replaced with "I don't personally like this trope so it's bad". It's a trap a lot of reviewers fall in to. I encourage you to be better than that and use your writing skills to lift up and and praise shows rather than dragging them down. Though, once again, I don't disagree on most of what you said regarding Shield Hero.

----Mint---- Oct 5, 2020 6:52 AM
81% shared affinity...interesting. Your notes or tags are entertaining on its own to read and you have an interesting taste. Not to mention, you gave Hyouka a 10? Outstanding move! I completely agree with your Shield Hero by the way

And I see that it's your birthday. Congratulations!

H31NST31N Jun 13, 2020 1:04 PM
I feel the same way. But at the same time I am intrigued by some of the opinions of the community that I would like to unravel in order to understand it a little better. So I'm still torn with which approach I should take...

Plus no-one wants to discuss old anime anymore, so there's not so much to gain from the community at least when watching an older show.

H31NST31N Jun 6, 2020 2:50 AM
That's the worst part about this whole thing, there is really no way of knowing what happens next, so one cannot possibly prepare. And we all still need to pay our expenses, but almost none of us are receiving income over this time, so it is pretty much chaos.

Even our beloved anime is getting delayed because of it. Although I do still have a LOT of older anime to watch, so I guess I shouldn't really complain about that, right? XD

H31NST31N Jun 4, 2020 12:03 AM
It's been alright. It's a bit tough doing classes online now and they dump a lot of work on us to catch up, but other than that it's been fine, I've been with my family, which is good.
It didn't seem to me that quarantine was doing much, even at the beginning, the roads and parking lots here were still full and I never encountered any enforcement at all.

I do however think that Wotakoi does go on the pure feel-good route too strongly most of the time and then it feels like the characters and their interactions are just static. Ideally, you can create a feel-good tone and also have some sweet moments between the romantically involved characters that progress them as a couple as well as them as characters separately.
I didn't dislike it, but it could have been something I really liked... Like most things, you know? XD

H31NST31N May 21, 2020 1:57 PM
Conception was pretty awful... Maybe it would have been enjoyable if I had watched it with someone else to laugh and make fun at how bad it is XD

Odd in what way?

I have watched Conception and Wokatoi in the meantime XD

H31NST31N Feb 2, 2020 9:02 PM
I have Wotakoi on my PTW too, and also Sangatsu on my Plan To Rewatch list.
And now, thanks to your contributions, Conception is on my PTW too XD I'm currently watching Citrus as a shitty anime candidate, so maybe after I'm done and have recovered from it, it'll be Conception time XD

Tomo_01 Feb 2, 2020 2:44 PM
It's definitely suitable as downtime stuff, yes. To be honest, I am a bit worried about the manga, since I have no idea how the story is supposed to span more than 4 times the lenght of the anime... but I guess it's worth giving a try.

Might be a candidate for the worst ED in existence?

Tomo_01 Jan 30, 2020 8:30 AM
It's pretty damn good! Almost each episode is able to make the majority of its jokes land, and I'm sure the voice acting and visual comedy play a big role. I also like most of the character cast, as they actively contribute to the comedy. (Though the fourth girl that got introduced really annoyed me by being painfully inconsistent. That was only for 2 episodes, luckily XD)
Story-wise though, it's nothing too impressive. Getting clarification about the whole deal with those keys near the end would help, but I'm not sure if that will happen. Oh well, at least the story elements so far were able to keep me interested, as those are executed pretty well.
All Comments