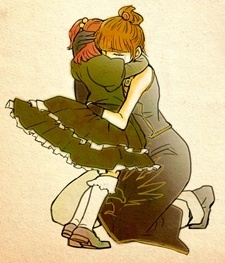 Man of culture tho

How have you been! I know we've all been busy haha. I noticed the veterans of MAL have died or slowed down so I'm not surprised if you've been too busy as well!

xm0123 Oct 10, 2013 8:17 PM
I tried to play the Clannad VN. Anime version's better. Yes, I think Kyoani's version of Clannad is superior. The VN does have its upsides. (You get a better understanding of Tomoya's character early on, for example.) but trust me when I say the anime is better.

As for KnK, I'm glad you asked! Since I'm a cheapskate, I'm watching on Crunchyroll......with no account, meaning I can't watch past the second minute of the newest episode. With that said, I already reported to EmperorTopaz about this, so let's see if I can do a copypasta.

When this started......holy shit, that music, that narration, the way she jumped over that fence, I was sucked in! Then Main Guy is talking to a girl with nice hair, still pretty interesting, then he visits Mirai........who is now acting like a moeblob. What? I don't understand; she keeps flip-flopping in her competence! One moment, she's like Homura Akemi, just completely destroying everything around her like a boss, then the next, she's like.......Homura Akemi, if that makes sense. XD

Then all of a sudden, the dialog gets all clunky, trying to talk about the world they're in. Were they trying to fit an hour's worth of exposition in 10 minutes? Like you warned me earlier, the show got very jumpy all of a sudden. Then, by the end, it gets good again! I also sampled the beginning of the second episode (you can do that on CR), still serious, still really good!

In terms of production values, definitely better than K-On. And the opening movie of Chunnibyou, too. Main Guy and Mirai still have "derp"* faces, even if they aren't as bad as other Kyoani series in that regard. (I guess we'll never see Kanon 2006 faces again ;_;) Animation quality is really good for a tv series. Backgrounds are nice, and Dat Music. <3 Voicework......not the best I've heard in Japanese, though Mirai sounds great whenever she's not moeblobbing.

In all, I think this could be a good series, it just needs to get better footing first. Less attempts at humor, more seriousness. (Though not too much) I was getting some serious Ryukishi vibes at the start and finish of the 1st episode!

*Oh, if you don't know, other friends of mine really dislike the facial designs of characters from more recent Kyoani anime, K-On and Tamako Market being the worst offenders. I find them.......below average. The faces in KnK are more like the ones in Hyouka; still rather simplistic, but not as cheaply drawn.

I've heard lots of praise for LB myself, though that might be I visit other sites than you. I have seen it get attention in the VN fanbase, not as much as Clannad, but there are fans out there. XD

Oh really? It'll probably be until next week before I can see Kanata. (I'm waiting for the Crunchyroll broadcast to be free. XD) We'll see if what you say is correct.

xm0123 Sep 28, 2013 8:18 AM
I tend to enjoy manga more than anime, so long as the series in question started off as a manga. There are exceptions, but that's usually how I roll. And yes, you talked about Rin and Ilya before. XD

I haven't made much progress on book two. It's definitely not as good as the first, even if I love most of these characters. XD I know it'll be a while before I see something that was not in the anime, so I gotta be patient.

I can't guarantee you'll love LB. I "only" gave the VN an 8, and the first anime season a 7. I mainly watch it because my favorite characters are hilariously awesome.

Let's see......didn't know there was mor Hajime no Ippo, good for you. I have no interest in Kill La Kill, to be honest. Don't know what Samurai Flamenco is, and while I liked Bacanno, I did not like the Durarara anime, so skipping that. Yeah, still just two new anime series for me. XD

xm0123 Sep 22, 2013 8:12 AM
Oh. Then you might like Kaworu more in the manga after all, though I make no guarantees. Ilya is my second-favorite Fate character (behind only Rin), and Iris was one of the better F/Z characters, so enjoy. XD

Yeah, got it on my Kindle now, and started reading it. Haven't dropped it yet. XD Though if this is the "worst", then I can't wait to get to the segment not covered by the anime.

Aside from Wendee Lee not sounding as silly as Aya Hirano, I prefer the English version of the anime. Has some of the best voiceovers I've ever heard in my life. I have noticed anime is funnier in English (assuming the English cut isn't crap) too, though I have laughed out loud at sub-only anime. (See Gintama and Watamote)

And look! There's actually two tv series from Japan I'm anticipating next month! One is Little Buster Refrain, which will cover my favorite segments from the visual novel, so I know I can't skip that. The other is Kyoukai no Kanata, the first Kyoani series I've been interested in in years. Anything new you wanna sample?

He does, and he has more screen time, yet, in at least half of his scenes, he is not the "perfect" angel that you see in the anime versions. At times, he is, but others times, he's not. Fortunately, as I've admitted, I'm not a huge fan of the character, but it's something that knocked the manga against its favor.

I may get book two soon, maybe even later today. And while I loved the original Melancholy, I must admit, some things turned out better in the anime. For one, Yuki and Ryoko's encounter was better in the anime, thanks to the graphics. Also, the ending with Kyon, Haruhi, and the closed space, in the anime, it was magical. Didn't quite feel as magical in the novel. Not to mention, some lines specifically in the English dub were funnier than the text. Otherwise, there were other things I preferred in the novels. ("If Japan legalized guns, I'd shoot myself." Never change, Kyon! XD) Take and give, it seems.

Oh yeah, I'm reading the Eva manga, and Kaworu has shown up. And yet......I think I actually found a way the manga is inferior to both animes; Kaworu is less interesting as a character. Alright, in that case, keep Asuka up on your favorites. XD

I'm Central California, so not far removed from you. Though I don't think political leanings has much to do with it; even people here that are rational in every other facet will lose their shit if discussing a relationship that isn't heteronormative. Oh, and before you ask, it's not just kids in school that are anti-gay; many grown men and women are like this too. It's hideous.

Share thoughts? I don't think I can read the novels that quickly. I still have only read the first book. Still, I can compare notes on the way. XD

"Enigmatic" True. "Pretty boy" well he does look better than Shinji, and unlike most retro 90s bishounen, he doesn't look excessively feminine, so there's that. XD "who is also damn gay for Shinji" Oh yes, yaoi fangirls. I've seen them online, but I keep forgetting they exist, given that I live in a community that, to put it lightly, frowns upon homosexuality. :-/ Oh wait! He's also played by Akira Ishida, a voice actor so charming, even I can't help but love him! XD Alright, I'll try to remember his presence........outside of Rebuild, of course. >_>

I think I've seen the name Erza Scarlet before, let me look this up sometime.

I'm a heterosexual male, I don't know what works best for women! Regardless, oh yeah, there's a character named Kaworu in Eva, forgot all about him. Oh, and for the record, I don't care for him, which may be another reason 3.33 failed for me.

Oh yes, the old cliche of, "She doesn't feel whole, because she needs a man!" Doesn't just happen in crappy romantic comedies, though I never got that impression in Disappearance, unless if Yuki is just that good at hiding her feelings. And the official English release is up to volume 9 at the moment.
All Comments