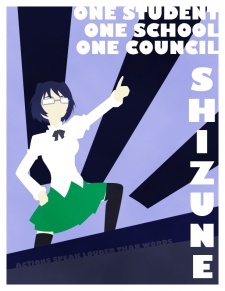 Flyffel Nov 26, 2014 4:04 PM
Ugh, yeah I was really worried about the other girls too after the OVA, but they don't disappoint in the TV anime. As an introduction, the OVA surely doesn't work that well.

Flyffel Nov 25, 2014 4:02 PM
Oh man, I was happy to find someone with a similarish shared list and then I see your score for Tamayura and my world explodes.

(And it doesn't really seem to make sense seeing how you enjoyed K-ON.)

No wait. You only watched the OVA right? You should probably try ~hitotose~ then.

maryarin May 26, 2014 2:21 PM
I was just going through some profiles and then I found yours. Just reading your self-introduction made me think that you are probably a very interesting guy. Although I usually don't read many reviews (mostly because they annoy me to no end), I've decided to at least read yours.

DawnHibiki Jul 27, 2013 1:02 PM
I would like to say that I love your rating scale alot! Your reviews are awesome too!

chirale Jul 20, 2013 8:50 AM
Hi mister_deaf! I've noticed you're in the Hanasaku Iroha club. Would you want to celebrate the studio behind this title joining PA Works too? Have a nice day! (^_^)

nil- Jul 5, 2013 4:17 AM
Hi there! Just wanted to say I love the level of detail you go to within your Eva 3.0 review. Practically all of it seems to be objective fact, with little of your own opinion on the work however. Is there a particular reason you offered it an 8 over another score?

113King113 May 28, 2013 10:43 AM
lmao haha nice one more thing if ya dont mind me asking how about worst character YOU have ever seen? like... hated would be the nicest thing you could think about when thinking of the character? mine is personally the dude off school days for me... it was one of the best endings i have EVER seen in an anime just cuz he got murdered

bautrey37 Apr 28, 2013 10:36 PM
I'm generally not very good at looking at deep concepts in a movie until someone points them out, so I generally take things at face value. I found that the Evangelion movie to be confusing especially for the first half as practically nothing is revealed to Shinji nor the watcher. I felt that to be frustrating and honestly kinda of boring. But when Kaworu shows Shinji the outside world that he caused, I was just awed.

Movie 3 answered a lot of my questions from movie 2 but also raised a bunch of more questions. Especially since we have a 14 year gap that practically nothing is explained. Well I expect the last movie to hopefully fill in the gaps. Some questions I have are:
1. If the two spears that Shinji pulled out weren't the right spears, then where are the other ones?!
2. Why is there a huge head of Ayanami?

I can't believe that you never proofread your writing. I tried finding grammatical mistakes on your page and their were none... I had to just proof read this comment a couple times to catch some stupid English mistakes. I guess that's why I'm Engineering major... Do you happen to be an English major?

bautrey37 Apr 27, 2013 11:04 PM
Fantastic review of the Eva 3.33 movie. You hit all the key points that a viewer experiences while watching the movie. I'm still confused by what I just watched lol.

You also have amazing English writing skills. It eases my eyes to see something well written on the Internet.