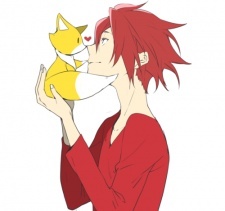 Seto_Sora May 3, 2012 11:04 PM
Haha, don't worry about it. I know how it rolls, life and all. lol But glad life's good. ^_^
I've been pretty good. If I could sum it up in one word, its distinctly Lothlorien. lol But me and my coworker started a pretty successful local anime club. So that's fun (and one of the reasons I haven't been around on CAA)
Shiki is awesome! I love it so far. I've loved it from a distance for a long time. The art is amazing (but give and take, if you like it you like it but if ya hate it ya hate it). The story is refreshing and original. And (finally!) its a vampire story without romance. A genuine thriller. I've sampled both the sub and dub. I like the sub more on this one but they're both good. All in all, I'd recommend it.
As for Persona 4 though... If you're playing the game then I wouldn't recommend it. Those who have played the game have said that the writers kept faithful to the story. But that was to ill effect for the first half of the season. Every episode was a battle introducing the characters under the same pretenses and situation (emotional problem = boss battle with friend = self realization) which made for a very very bland first 10 episodes. I was watching for the non-battle character development episodes that came between each episode. ^_^ But things really picked up around episode 11 all the way through the rest of the anime. So the last half was really fun! And after thinking about it, I'd even say that it was worth the drag of the first half. But the better experience is the video game for sure (I'm biased though, I love ATLAS games ever since I played Catherine).


Oh yes, yes. Chihiyafuru. Great show, it actually got really more into friendships and such. I was a little disappointed they didn't show Arata much, but it still was a great show, I'm hoping they'll make a second season. :)

I guess what I liked most about was how it wasnt just about the game itself but the support and love you see unfold in the characters and yeah. It's just sweet. :)

There's also a 2nd Season, but unfortunately it was never licensed. So there is only sub and you have to find it on weird websites streaming. :(

But I did enjoy it as well, though it is very different and a little darker than the first season.

JulianneinJapan Mar 28, 2012 6:18 PM
Hey!!! I just got really excited when I saw that you were watching Saiunkoku Monogatari! How are you liking it?

You like Bakemonogatari (I'd wager) because it's Plato's Dialogues for a modern audience :P Well, not exactly, but the heavy use of dialectic would make you think so. The main strength of the series are its characters. Each one with a distinct, fully-fleshed personality (well, except maybe Sengoku,) the series rotates around the intersection of those personalities against a backdrop of mysterious and wholly original paranormal occurrences.

Sometimes those personalities agree, sometimes they clash and when they do, they engage in what blkmage adroitly defines as "verbal ping-pong" that range from the trivial (the pronunciation of a name) to the deeply emotional (a purposefully obscured confession of love.) The series is incredibly smart and wields masterfully that wit while dealing equally action, comedy, mystery, or drama.

All this without mentioning the visuals: a both playful and daring experimentation with cinematic techniques, abstraction and visual symbolism crown an already awesome character design and fantastic production values.

As for Ghost Hunt, it does improve but little. There's hardly any character growth at all and the actions and reactions of the cast are almost copy-pasted from one arc to another: Priestess is haughty but ineffective, monk and priest are slightly more effective but ultimately not enough, masako is always right but has an awful attitude, Naru is aloof and a jerk and Mai gets upset at him because he apparently always takes the worst possible way of action, then she has a prophetic dream, gets attacked, saved and ultimately Naru was right, everything gets fixed and Mai remembers why she's reluctantly in love with the bishi jerk. And the series finishes just like any other arc. Not to mention that production values remain below subpar along the whole series.

The only real reason to watch the series are the ghost stories themselves. They are hardly scary but quite interesting, especially the last 3 arcs. The second to last arc even manages a genuinely frightening moment.

Awesome, awesome series. I will be posting about it at length on CAA later on.

It's funny, the official subs have that line as , "It's a Sunday," but considering what Kanako is eating, yours makes more sense

...unless he is refering to the fact that it is Sunday, which I think Kanako mentions...Ah well, it works either way =).

HatandClogs Feb 3, 2012 5:53 PM
Yeah, I was pretty disappointed that after like a year and change of trolling, nothing actually really happened that was all that interesting(though that Sinners part was pretty adorable). I'm not sure if I prefer that to Asada's super trolling.

I wonder if I'll will be a troll-iffic.

TheSubtleDoctor Feb 1, 2012 9:45 PM
Thanks. I am going to library school (career change from philosophy -> bullet points:; was teaching and such, but life changes put it on hold, then I realized I was going to have to travel too much early on in my career and/or make too little money and didn't want to inflict either on my fam), and this is where I am learning web design. It is simultaneously a fun and frustrating business.

I am going to try to watch another episode tonight, but the sleepy might come upon me suddenly.

I just wanna say, again, sorry for bringing any stress into your life. Not something I really want to do/should be doing/you deserve. We are totes cool 'n all.
All Comments