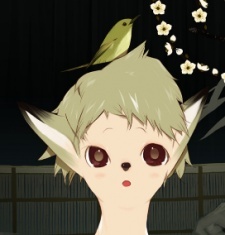 PuruRuru Apr 26, 2018 3:31 PM
okay, okay, imma make a review after i rewatch it, i was really disappointed by it and felt like it was kitsch in many ways. In a way anime is art, in a way anime is entertainment, and imo this one failed at both, but it still got a lot of respect just like most other kitsch art does, which in a way frustrated me, so i am more than happy to make a review of it.

stand Apr 13, 2018 12:08 PM
I'm not sure I understand your use of the YKK image? Even in that image you can see a playful and rich expression amongst all the "non-existent" body lines.
YKK is what I would consider his artwork to be at it's visual peak.
I do understand that he aims for simplicity but in that manga he had both a wonderful grasp of clean and yet simultaneously detailed character artwork.

With his more recent works it's the faces is what gets me the most. He exchanged noticeable features for round blobs with their eyes closed about 90% of the time, and I counted my lucky stars whenever I saw a semblance of a nose in any particular chapter. So yeah you are right about the lack of definition.

Kabu no Isaki was one of the worst offenders. Shiro, the main female protagonist of that manga comes across as a duller incarnation of Alpha that's half as interesting to look at considering she only defaults to two expressions. Half-lidded daydreaming eyes or eyes completely closed.
The more I read the more I found that it drives me up the wall to see the same limiting expressions chapter after chapter. His serene take on things just passing me by because I wanted his characters to look like they are living in all those moments.

It's not like i'm an artwork snob either, I have read and liked manga that looks like this:

and of course artists like Okazaki Kyoko or Matsumoto Taiyou who at times have a very minimalist and/or crude approach to their characters, but with artists like these I see their message loud and clear and they resonate.

Well, in the end all artwork and manga is preference. I commend Ashinano's passion for SoL and that he has stuck to a formula that he feels is best. (his own Mitsuru Adachi moment if you will) but his style no longer meshes with mine and that has left me with zero interest to check out more of his works.
I hope this answers some of your curiosity.

Signifie Apr 5, 2018 1:49 PM
Nah, I haven't played it yet. Most of the comments and opinions I've heard about it have been positive, including that it's a well-written and powerful story for its short length, so I'm looking forward to it. I had actually forgotten to put it on my vndb wishlist so thanks for reminding me of it.

Signifie Apr 5, 2018 8:54 AM
Planetarian: The Reverie of a Little Planet (planetarian ～ちいさなほしのゆめ～ Planetarian: Chiisana Hoshi no Yume) is a Japanese post-apocalyptic visual novel developed by Key, a brand of VisualArt's whose previous works include Kanon and Air. It was released over the Internet on November 29, 2004 for Windows PCs, and is rated for all ages. The game was later ported to the PlayStation 2 (PS2) and PlayStation Portable, as well as mobile devices. The story centers on a middle-aged man who comes across a malfunctioning robot in a dead city. The man, known simply as "the junker", stays with this robot for a time and attempts to fix the projector of the planetarium where the story takes place.

HaXXspetten Sep 1, 2017 10:31 AM
Well if you wanted anime then I'd say Futabu yeah. But I generally prefer doujins and eroge

Futas are okay though

Kitsu-nee Jul 9, 2017 7:52 PM
That's a very good question! I really have no idea... Might be something like "only this vn, and there's nothing left for me from Key"... Although I haven't read Harmonia yet either :> Need to catch up with both, sooner or later...
All Comments