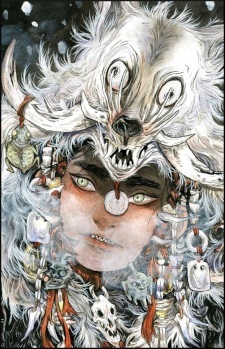 LoneWolf Aug 21, 2017 10:19 PM
Yeah Beageruta doesn't seem to be taking off in the same way as Blade and it seems to have more of his dark comedy style humor. I'm really interested in Nami yo Kiitekure as well it seems Kodansha is licensing both his new manga. It actually prefer Dark Horse as an english publisher, but can't really do anything about that.

Thanks, I don't do much writing nowadays. Unfortunately these type of articles on obscure mangaka are not very popular. Usually it is the top 10 lists and stuff with cute girls in it that get the most views. I'm currently collecting some info on Osamu Tezuka for an article, but I've been procrastinating to be honest.

LoneWolf Aug 21, 2017 10:55 AM
Yeah to be honest the trailer don't look that great, even though I like Miike as a director. I really like his adaptation of Ichi the Killer, he really put his own spin on it. I also like his work in horror.

LoneWolf Aug 19, 2017 10:47 AM
Just curious about your thoughts on Hiroaki. Also are you hyped for the live-action movie directed by Takashi Miike?

For the introductory questions, how are you? Anything new inside and outside your online persona? Anime you've recently watched/planned to watch? Music you like?

Do you care to share any general thoughts on Heartcatch Precure! now that you've finished it? I don't know many people who have watched it that aren't already into the mahou shoujo genre more generally.

Weird though. It's licensed in in Italian but not English, which you'd think would have a larger audience making it more likely to receive a translation.