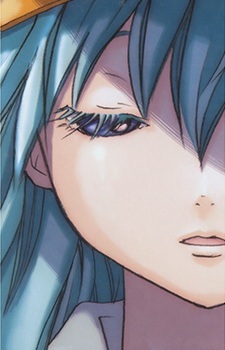 Yeah, it’s been a while… I’m doing fine. Also, sorry for the late and lazy reply.
I had anime burn out for 2 months but Kare Kano fixed that for me.
Planetes was actually rewatch.

Beautiful Dreamer was fantastic experience. Oshii elevated comedy centered anime to something truly remarkable. Perception of dreams was depicted excellently. Comedic scenes not only preserved the atmosphere of the original TV works, but also elevated the “sense of dream” by showing sudden tone shift from serious scenes to comedic one.

I’m planning to watch both, but I haven’t gotten into mood for them. Hopefully, I’ll watch both soon.

I haven’t finished Romeo yet, but I have mixed feelings. Romeo and Alfredo really lack flaws. They are kind hearted boys and their actions put smile on my face sometimes, but I feel like there’s nothing more to it at this moment. Hopefully, last 1/3 of the show will prove I’m being wrong.

Oh, thank you. I modified the design that I found to suit my use. I hope you accessed my list from the “animelist” button on profile. I used “priority” to show +/- of the score. Ex. High 9 = 9+. velvetPhos Sep 19, 2018 8:46 PM
I’m glad that you are enjoying rewatchin/rereading Aria that much! Yeah… I feel same way. Aria is very human and genuine at core. Not sure if we’ll still be on this site, but I hope we’ll still be talking about Aria 10 years later, lol.
That Akari quote is very relatable… I felt like that when I read Aria. The experience of Aria is the pure beauty. Like the feeling that I suddenly get overwhelmed by the beauty of scenery after getting out of long tunnel…

I see. For me, I always had inner conflict of how I should feel about the anime Aria. I love Aria, but I always felt something is lacking in anime version. The manga resolved that for me. Manga filled everything that I felt lacking in anime, and it solidified Aria as my favorite franchise of all time.

Hmm, I’ve heard about that for many times. My dad is huge fan of Twelve Kingdoms because he is very passionate about Chinese history and mythology. I watched few episodes with him right after it aired. I remember he had said that novels go much deeper both narrative and setting wise.
I want to read the novel but I refuse to read digital copy, so I need to buy one. I’m going back to Japan this winter for two weeks, so hopefully I can find the hardcopy of novels there.

Alright, I would definitely check them out when I get to right mood to watch/read them.

Yeah, physical copy of Aria manga is nice, especially for the collectors edition that I got.
They rescanned each page in higher resolution in the masterpiece, so it’s stunningly beautiful :)

For manga vs. anime thing, I would say I prefer manga much much more. I haven’t finished yet as you can see, but I’m very confident that I would like manga more than anime at the end.
First of all, manga just has much more information. Very detailed panels, well-drawn subtle facial expressions, more word-plays, extra small dialogues outside of bubbles, very well-utilized “tones” (I refer to the thin sheet that mangaka use to shade/darken part of panel), more detailed background info, more natural character interactions (anime felt little off due to some of the chapters and dialogue that they had to cut), well-placed chibi comedy panels (I usually find those annoying, but Aria placed them in perfect way… timing, size of panel… etc… are just perfectly tuned), and even some page turn gimmicks that added to flavor to chapters like the cat kingdom one…
Second of all, anime version made characters sound too cute. I’m not talking about the quality of voices itself. I think voices are perfectly matched. However, the subtle difference in sentence structures just make me feel the characters in the manga are more “human” than characters in the anime. I can believe that Akari is 15 in manga, but I can’t in anime. I think Akari is the one who is portrayed so much better in manga. Facial expressions, dialogues…ect… are more natural and mature… and at same time being cute in manga. Most importantly, anime lacks the description of how Akari and people from Man-Home are deprived of any natural beauties… (they infer that little bit, but I think you get my point), which just makes me feel the actions of Akari are little off in anime. In manga, every actions of her makes sense due to detailed background/character descriptions, but anime don’t have that, unfortunately. Akari might have been my fav Aria character if I started the franchise from manga.
On the other hand, anime version is still a great series due to amazing soundtrack. How every single song are played at perfect timing at perfect scenes is just truly amazing. I care about OST alot, and I haven’t found any anime series that used OST in such a beautiful and effective way like Aria.

That makes sense. I don’t play games, but I feel like it’s similar to buying manga.
I started to feel the same way as you recently, and I decided I would only spend money on hardcopy manga, lol. I love owning manga regardless of how much I like them because I reread what I own pretty often and I enjoy them most of time :) 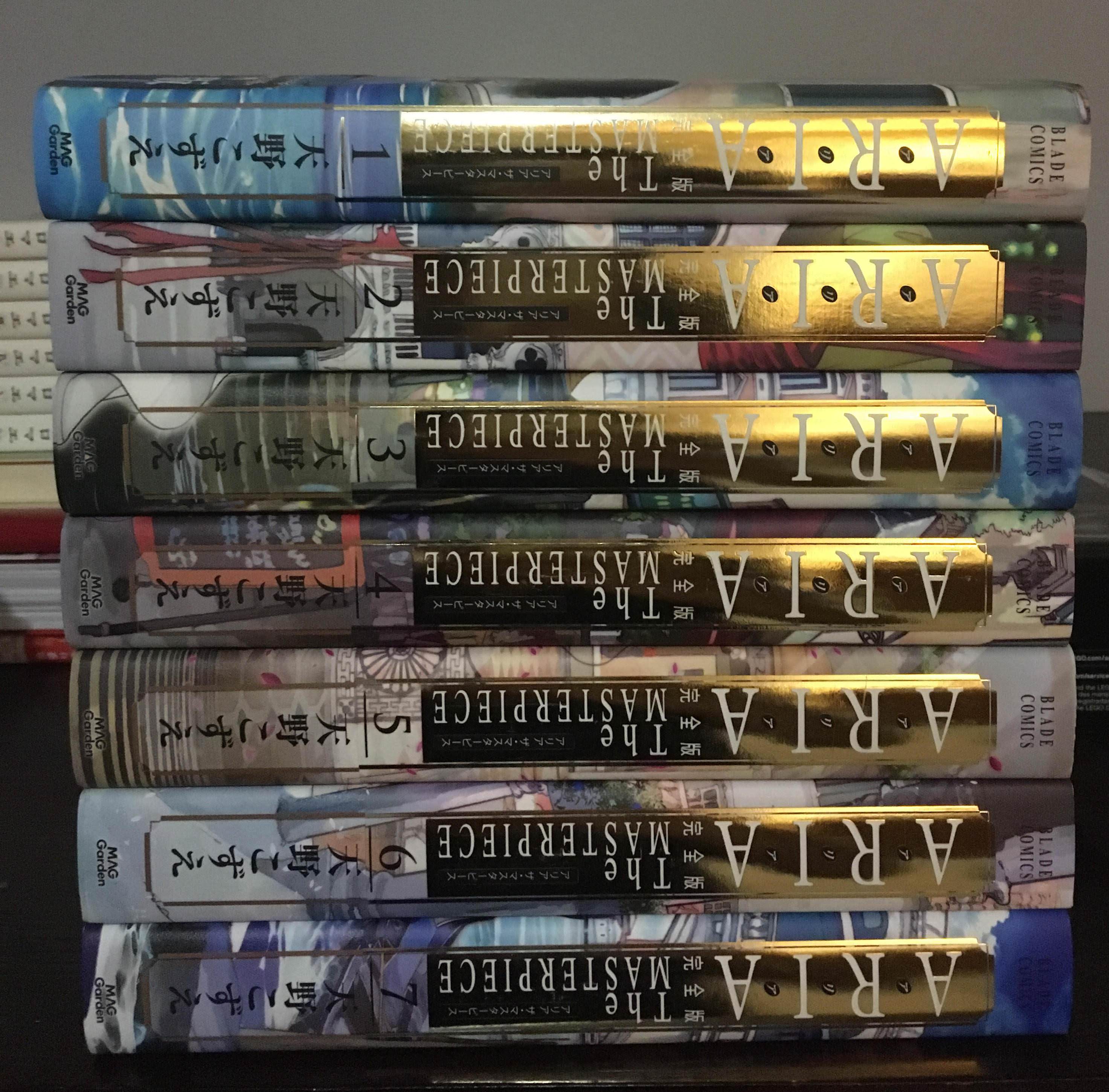 velvetPhos Aug 8, 2018 7:49 PM
That is nice to hear.
Yeah, I feel same way. Revisiting favs are always interesting because our perspectives and values always change over time.
I haven’t watched/read Anne and Yokohama. I better check those out soon since you regard them so highly.

Ah, totally understandable. I hold off reading Aria manga for so long because of how much I loved the anime TV series. I didn’t want to read digital copy despite of my desire to read it as soon as possible because I wanted to have the best possible reading experience for Aria.

Aria the masterpiece is arriving tomorrow :)
I can’t wait to read it.
Unfortunately, I don’t own much merches.
I have few manga… Thermae Romae, Arakawa Under Bridge…ect.
And few figures from idolm@ster and vocaloid, which I don’t feel passionate anymore.
Also, 10th anniversary book of Fate franchise, which I don’t feel passionate anymore, either, lol.
That’s about it.
I want to get more manga, but it’s really expensive to get one in the US, unfortunately.

velvetPhos Aug 6, 2018 3:41 PM
I can see that you are revisiting your favs :)
Enjoying rewatching/rereading so far?

velvetPhos Jun 24, 2018 1:11 PM
There are many short series, but there are also few gigantic 50 eps series, so it’s still impressive that you finished those in short time.
Yeah, I finished Thunderbolt a day ago. 1st season is great, but 2nd one… I don’t understand how did that happen. 1st season gave the impression that director knows what exactly he’s doing, but I guess not :(

I was planning to watch Stardust Memory, but I heard so many bad things about it. So, I started Turn A instead. I finished first 5 episodes and it’s great so far. I hope I’ll enjoy as much as you do.

It’s always good to rewatch those. Juuni Kokuki was in my top 5, but it dropped to my top 15 ish. It’s still in my fav list because I’m too lazy to think about my new top 10, lol. Even though the ranking dropped, I ended up appreciating the show more.
Last Exile was awesome. I felt like it was better version of Ergo Proxy for some reason, even though those two shows don’t share much similarities.
Right, same thing is happening to me. I would rather watch some new 80s series than rewatching because of my limited time :(
I don’t know what you are going to study, but it shouldn’t be too bad unless it’s law or medical stuff. I hope you’ll have good amount of free time :)
All Comments