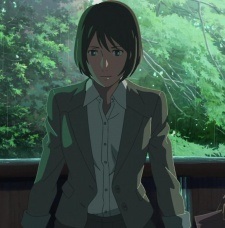 Avancerat Dec 10, 2019 4:27 AM
I can't take your reviews seriously when you only rate shows depending on if you liked the ending or not. Really superficial

SoLongGayBowser Nov 10, 2018 6:56 PM
You review your shows based on your expectations of what you thought they would be instead of just reviewing them for what they are

ChristopherKClaw Apr 24, 2018 8:48 PM
Hilariously good review for Kaguya Hime, I actually bought the DVD for my mom because I was so certain from the reviews I'd seen and Ghibli's rep that it would be amazing. Holy shit, 2 hours of gorgeously-animated boredom, stale dialogue lifted right out of the original story with the nonsense original ending slammed on there without any explanation or justification. Not a remotely compelling or insightful take on the legend, devoid of charisma on a scene-to-scene basis, and overly-proud of its bare-bones and completely obvious and overdone message of female empowerment, that movie was a goddamn disappointment.

yarrakgibin Mar 4, 2018 9:53 AM
I'm curious, were you born with such a shit taste or have you perfected it in your lifetime?

Joshimatsoo Nov 24, 2017 7:51 PM
Kaguya's score was masterful, not sure which OST (or movie) you were listening to/watching.

PixlReality Nov 16, 2017 8:43 PM
For your review of "Psycho-Pass" I can't help but mention your error in thought. To start you said: "its not exactly superb writing." So you're insinuating that it has SOME qualities about it's writing that is somewhat "superb" but doesn't acknowledge them at all. You also call it "generic" in it's art-style, but don't quite understand what Cyberpunk really is. I don't think it really matters what form of art Cyberpunk can take, it's all about the joy of watching it and seeing the big corp taking control on a society.

The most absurd thing I read that you said was: "The citizens of this world have absolutely no reason to endure living in such place." Do you not understand what cyberpunk means? Or the concept of it? The people accept it because that is what they consider to be "right." People in today's IRL society live by these same standards, they do not think for themselves, computers and auto correct think for them, as well as other people higher in the chain. You also state: "In fact the entire cast of protagonists not only should notice on rational and political level how evil is the system they are protecting - the story gives them also every emotional, ethical and psychological reason one can think of to openly rebel. Yet they don't, they choose to back up the system instead." And this is because it's nearly impossible to take down something as powerful as this. Not only on a physical state, but a mental one too. The citizens who live in a world that is basically controlling it's citizens and what the outcome of their lives could be is imperative to them. It would be a social-meltdown to every citizen that saw the truth, and with the shows term, their "crime coefficients" would rise and stress would impact an entire nation. Japan would essentially be ripped in-half.

To be fair, I think it's the lack of understanding that you deal with. You are too enthralled at looking into the negatives of the show, and shying away from the positive. Also by looking at other reviews and replies, I can tell you're not a social one, so I don't expect a reply, but if you end up replying to me, I don't really care what you have to say. Your opinions on the show are radically wrong. And have been corrected.

ChristopherKClaw Oct 12, 2017 4:45 PM
Ugh I'm so sorry I always forget to go back and check those after my long periods of time away. I'll reply asap. You were gone for so long though! I was afraid you'd finally moved on to bigger and better things.

ChristopherKClaw Aug 25, 2017 3:03 PM
I watched Trust and Betrayal. Holy shit. Really, totally stellar. I had never thought to watch it because I'd already read the manga and therefore knew everything that happened, but they changed little things (especially towards the end) that lifted it immensely, and the atmosphere was so completely different than the source material it was almost unrecognizable. I went back afterwards and watched the first episode of the show for old time's sake and immediately became immeasurably disappointed that nothing else in the franchise was ever going to carry that same sense of grounded intensity and uninterrupted emotional weight. I grew up with Kenshin, so I've always been a loyalist, but I very much see where you're coming from. Compared to that OVA, even the manga is just a let-down.

Irrlichter Jul 23, 2017 4:17 AM
Spot on Toradora review. After having watched it so many times already I still can't manage to hate it despite all its flaws. It's so silly yet it always makes my gut wrench, whether because it's emotional or just plain cringeworthy. I guess this is the effect people have with shows they've watched early on.

ChristopherKClaw Jun 8, 2017 9:44 AM
I see you have become extremely engrossed in the qualities of endings.

ChristopherKClaw Jun 1, 2017 8:04 AM
Well, I'm trying to get more serious about writing fiction, and I felt like in order to really get good at writing I needed to take the time to read a few more books. I have no doubt I'll be back once I find something that really grips me again, and I know I can't REALLY check out until I watch LotGH, but with anime's writing ceiling not exactly chandelier-worthy I've had to begrudgingly admit it's in my best interests to dig into some differing mediums.

Opinionssucks May 26, 2017 6:58 PM
oh yeah just because its a rip off of minority report does not make it a bad show i
thats like say the matrix is pretentious cuz its a rip off of ghost in the shell so think that over again
All Comments