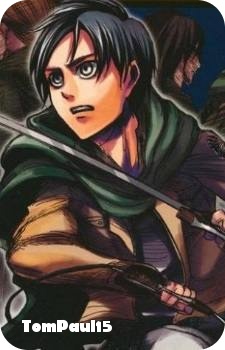 myautumngalaxy Jun 17, 2020 12:04 AM
LOL nonono I meant *I* was showing up late with starbucks, commenting a million years later XD And thank you!!! All I did was work tbh, I'm "essential" so I've been working this whole time still orz.

And I still love Mob!!! I hope they do a season 3 because the manga still has some content left apparently! I just watched Dorohedoro and neeeeeed to read the manga. Demon Slayer I was SOOOOOOOO hype for, the manga sort of lost my interest because it becomes very repetitive and just long battle after long battle, boom done. But dude yes the animation is gorgeous! I'll def still be hype to watch everything else because of how pretty it is! I'm sure the battles I was *yawn* over in the manga will be waaaaaaaay cooler seeing animated!

myautumngalaxy May 24, 2020 12:50 AM
HEY! omg I realize I never wrote back to your other comment to say that NONONONO Banana Fish and Mob Psycho are NOTHING alike, not a single thing! XD I only brought Mob up as an example of an anime I love. *5 years later with starbucks* But I hope you're doing well too!!!!

I ended up hating the certificate program. Got a job in it and everything but it was miserable. Def going back to school and saying screw certificates and getting a full degree XD! None of the other certificates my school had really interested me. But hey, it's really cool that it sounds like you have a game plan! When are you going to take the other courses? Haha and I feel youuuuu! At the meantime I'm just back at my usual meh job.

Hope you had a good holiday and all that jazz!!!

myautumngalaxy Dec 11, 2018 1:13 AM
LOL! I actually... haven't liked it at all the past so many episodes. I caught up and I'm very meh over the series now. It's VERY repetitive. Like. Dude gets in trouble, dude shoots and kicks his way out of trouble, rinse and repeat XD! AND I had to take some time off from school >< what about you??

myautumngalaxy Mar 21, 2017 1:24 PM
Sure quick reply from meeeee! I'm awful and didn't think to respond until MONTHS later, wtf is wrong with me?! XD

Gah, I'd love for it to come true, but I doubt it! XD I wish when I was younger I made more strides toward becoming an editor and made more serious attempts at writing in general. Instead I did writing just for fun, which is fine, but it's nothing I could use towards helping my dream, yanno? XD And omg noooo, comics would mean I can draw, and I cannot XD! I mean, I have this huge novel idea that's been swimming in my head, but when tf do I ever get time to just sit down and write, yanno? XD Ah, I've just learned how to draw up standard things online, it's usually house plans and metal plates/pieces. It's not crazy exciting XDD! Do you actually like medical coding, or is it more for thee money? I'm totes just doing CADD for money, and it's not like it makes BANK XD! But it's better than what retail and such pays, that's for DAMN sure! I already got a new full time job that's related to CADD! Haven't started yet, they're doing the background check and all that. Annd it would be using a different program in place of CADD, unfortunately. BUT still, I decided I should at least give the job a go! Oh oh, and if you ever get to work from home that would be ammmmazing!! XD

Are you excited that AoT is having it's second season coming up??? :DDDDD

So far my break has been suck shit because I've had full time hours and hardly anytime to actually relax! XD But anyways! Going back to our now ancient convo! I don't mind CADD, I certainly am not in love with it, but I think I can not hate my life while doing it XD! That's the only reason I'm still considering a degree. Maybe it won't be worth it in the end, but I'd still like to try working towards something more. College is disgustingly expensive, and I really don't feel like there is enough payoff for how much it costs, but idk, man ;;. I just would love to be an editor someday, and no way in hell can that happen without a degree ;;. Like, my dream job is still working for a comic company or something lol.
Omfg yeah, DGM has gotten hella confusing. Like with the Earl. He is... Mana? And the 14th... is also Mana? XD But there was that scene where Allen brought back Mana, and the Earl was there bringing Mana back, so like... how? ALSO IDK IF I TOLD YOU, but I loved the last epi of Hallow???? It was possibly my fave episode of it series??? It just actually made me emotional??? IDK I liked it a lot! XD But no, yeah, I'm not sure why they had to change voice actors, that was kinda a bummer ://! I ended up missing the original voice actors a lot, just because they were the ones I was used to for a hundred or so epis, yanno?

myautumngalaxy Dec 11, 2016 3:44 PM
I hope you had a great Thanksgiving, too!! Istg I'm getting back to you soon. This semester is almost over for me! The 15th, to be exact. I'll have so much more time then, jfc I've been going insane lol.

myautumngalaxy Nov 12, 2016 7:19 PM
I wrote back to this!! I know I did! But I just checked com-to-com to see if I missed a reply from you, but nope, apparently what I typed never got posted to you??? GAH!!! I was wondering why I still hadn't heard back from you -.-!! I'll write back again soon, gahgahgah.

myautumngalaxy Sep 18, 2016 1:32 PM
Always having weekends off sounds heaven sent! XD So you'd be working with computers, yeah? Is it something where you'd get a certificate when you're done? Right now I'm doing CADD - computer aided draft and design - whiiich I'd just try to get a certificate in XD! The program is about a year, and that's that! I still want to eventually get a bachelors, but atm I can't be full time or at the uni I'd need to be at since it's pretty far away. I can't work to pay bills and commute and be a full time student, sooooo I'm hoping this CADD thing goes well so I can get out of retail XD!
Sigh sigh, I don't get it either. I also think it would have been good if the Hallow spent sometime highlighting a few important things from the previous series. The original anime was soooooo long ago, and a lot of people in the forums seemed confused because 1) it didn't really recap despite this sequel being years later, and 2) the pace is so fast and you get info overload! XD I was even 'wait wut' a few times because I've forgotten things from the manga XD! LOL nono Cross dying didn't really have more buildup, that was the wrong way to put it, sry XD! I'm fairly sure it was exactly the same in the manga and the anime, it was just better paced in one over the other because the anime crammed so much content in one epi. The manga can hold a better air of suspense imo just because of the breaks between chapters, and the general slower pace of it all. Still not a bad adaptation, I just wish it was so much longer than it is XD!

myautumngalaxy Sep 4, 2016 4:58 PM
Oh jeez lol. Yeah I recently moved so I'm always having a million things to do with that, I'm working about 30 hours a week, annnd I also have class XD! Ugh ugh adulting. I need a long weekend to recharge, buuuuuuuut I always work Saturdays XD! What kinda online courses are you taking, tho??
Right?? I wish the anime would have been around 20+ episodes!! Oh man, I love the DGM manga a lot lol, but I get that some people just can't get into manga as much as animation! Honestly, the manga made me feel so much, but even with the added effect of voice acting, I don't feel nearly as much watching it and it's mostly because of the pacing. Like, when we had that flashback with Mana, when I read that it felt like a well timed glance into Allen's past, whereas in the anime it almost felt random. Cross dying didn't have any buildup so that wasn't a gasp factor to me, all the reveals happen so quickly that you don't get much anticipation or buildup. I feel like the anime could have been sooooo much better if it was just longer, because they've done super well at sticking to the plot of the manga and showing all the main events.

myautumngalaxy Sep 2, 2016 7:32 AM
Ugh, busy af being an adult, that's what! XD How have you been, man???
I do love seeing these arcs animated, but tbh I haven't liked Hallow much... Everything kinda feels rushed and like it lacks that emotional punch when you read the manga. Tbh I think it's just the pacing of it. But it hits on all the major events so it's a damn nice refresher of all the things I have forgotten XD!

Also hskjdhfkjsdhk she did?! I need to follow her on Instagram! I'd freak it my manga love came backkk! Atm I'm in love with Owari no Seraph because it gives me DGM vibes XD!

I was planning on trying Kekkai Sensen at some point, but I wasn't overly interested so maybe that's a good thing lol.