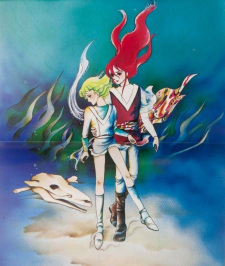 SingleH Sep 23, 9:37 AM
omg I just saw your video about my comment section that Benja777 mentioned the other day and had an absolute blast. I can of course tell this kind of thing makes you mad, whereas I'm the type who simply finds it funny and laughs about it, but we obviously have the same fundamental values regarding everything. I see you haven't logged in since the changes went live back in the beginning of August, but I hope you see this somehow.

Thanks for the praise. <3

Retro_Waifu Aug 4, 6:00 PM
The new review system is horrible i see why you're leaving on that alone. Maybe i'll try Anilist too.

Del_Duca Aug 2, 2:25 PM
Hey, I owe it to the fans to finish Rusted Armors so I will return! I have had to take a big break due to a ton of personal life things but I am almost ready to come back ;)

Thanks for the recommendation!

RBTHE1ST Jul 31, 9:16 PM
you should watch and make videos on the following
1) 3 gatsu no lion
2)houseki no kuni
3)aria
4)baccano
they would be good picks for your channel

NextUniverse Jun 16, 1:38 PM
Thanks for your words. I simply never understood the endless praise for this anime but there you go. It's decent enough tho.

Farabeuf May 14, 12:43 PM
Thanks for the friend request. Absolutely love your favorites. So much ole school goodness!

AddaeAkono May 14, 9:41 AM
As someone who has never watched the original OVA and probably never will, I absolutely love LoGH: DNT and I think Production I.G(one of my favorite studios) did a great job in bringing the series back to life. I first heard about DNT from a couple of people on Discord and when I saw it on Crunchyroll I decide to take a chance and slowly binge watching it to get to this point in Collision as I immediately fell in love with some of the characters. I'm a huge fan of Yang Wen-Li(Miracle Yang) because he reminds me of myself and it makes me sick that the politicians in the Free Planets Alliance are treating him so poorly by taking his presence for granted. If it wasn't for Yang, the Free Planets Alliance would have already surrendered to the Empire. Also the soundtrack in DNT is so good as I loved every single OP and ED song so far. Its been an awesome ride so far and I can't wait to see the end of the Collision arc and how the rest of the series unfolds.

It really is the Star Trek/Star Wars of anime.

AddaeAkono May 14, 7:12 AM
Thank you for adding me as a friend. I saw your comments in the recent Legends of Galactic Heroes New Thesis: Collision episode. How are you liking it so far?

samashi20 May 14, 12:05 AM
Thank you for the friend request fellow LoGH enthusiast!

Venzs May 5, 5:11 PM
Incredible Made in Abyss review

First, thank you for taking the time to reply. I appreciate the time you put into this.
I have to say that reading your reply was educational for me, knowing that you seem to be someone who has a vast and varied knowledge over older anime shows which I also delve and indulge to from time to time. I agree with all the things you said. Sometimes I would wonder what could be the difference from the people of the animation industry back then and now. Could it be work ethics? The authenticity and the originality of ideas? The freshness of the concepts? Sometimes, these questions cross my mind to find an answer as to why people back then, with less advancements to technology than today, are somehow able to pull up and create meaningful works. It would appear like as the years have progressed, the quality of anime has also declined.

I could not rant enough of this. I am sorry if I may appear angry with my words.
It is just that people in the industry today are just constantly recycling ideas and reusing elements in the past just for them to be able to create newer shows. Some, though not all, lack authenticity and originality. Some shows feel like they are made of several components from different shows in the past just mixed and stitched together to form a new show. A protagonist that dies in the first episode then gets teleported to a different world or dimension. Or worst, some are just about cute girls doing cute things. Some try to cover up with good animation to sugarcoat the weak plot of the story.

With in regards to 'Legend Of The Galactic Heroes', it has been one of the shows I have been meaning to start and watch for sometime now, amidst the fact the I do not seem to find much enjoyment with mecha and Science fiction genre. It is a title I have been recommended with for a long time now, and in fact the first 3 episodes are in my computer now, waiting to be judged and started. I really want to give this one a try since I know it's by Yoshiki Tanaka, and I admire his works, along with the Studio Ghibli movies and the late director, Satoshi Kon. For Yoshiki Tanaka, I really enjoyed the 'The Heroic Legend of Arslan' and 'Souryuuden'. Are there other works by him that you enjoyed aside from 'Legend Of The Galactic Heroes'?

And I wholeheartedly agree. It is indeed important to watch the classics and preserve them for the future generations. And like you said, it would be hard to understand the newer works if one does not watch the classics. It works like a syllabus of a certain course, or even to any field. If one does not know about the fundamentals, or at least, try to learn them, it would not be a surprise that they will encounter difficulties in understanding the much bigger and complex concepts. They should be recognized for it, along with the great minds and working hands behind them that made them possible.

It's a sheer fun to reply to this.
Thank you for sharing your thoughts, Chase. Hope to read more from you.
Take care and God bless.

ZZ should NEVER be skipped as some fans always like to say as its very underrated & misunderstood. I myself don't give it enough love & appreciation as i should. Also Abhsalonikas's video on zz is good too (https://www.youtube.com/watch?v=QKNk7wb_7xQ&t=225s) check them out if you haven't already.