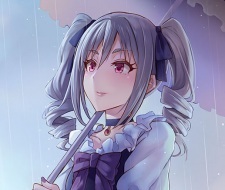 23feanor Mar 29, 2021 4:00 AM
Hey, I was checking your blog out and your reviews are really good. Just read your reviews for D4DJ (no one i know here on mal has seen it, so nice to know another person other than me watched & enjoyed it) and Adachi to Shimamura, both brilliantly written.

I have a feeling we met during a reddit group watch, was it Simoun or Mai-Hime, or maybe Gurren Lagann?

Anyway just wanted to say hi and that i'll be dropping by your anime blog more often to read your reviews.

Oh thats pretty cool. :O
Did you enjoy studying it at the time? What are you studying now?

Wow, very creative xD. It sounds very cool though. Amazing what people can come up with and it just works. I havent heard of Gojira before, might check them out. :)
How long have you listened to them for?

Wow, 2 years!! *Claps*
You are very commited to it, which is really good. Im sure you have gotten better. Its a wonderful feeling when you put a lot of work into something and you can be proud of it.

Ahhh nice, im actually planning on watching that soon. Ive been on a binge mood lately so im trying to watch as much as i can xD.
Oh thats a great idea!! Exercising while watching anime xD. Ive seen someone at the gym do that before. I dont think i could that because i want to pay attention to the anime xD. I havent heard of 86 either. I only know the number 86. XD

I am looking forward to a few new seasonals, like My hero academia, devil is a part timer season 2 (im actually really close to finishing season 1 and im loving). But ive been watching some of the older stuff, since its been sitting on my PTW for to long now, like D-Frag.

I came across your profile by looking at "Online recently" page on MAL. So im just looking at a lot of peoples profiles and such xD.

Do you have Discord by any chance? Is just im on there more than here but if you dont, then we can carry on talking here. :)

I want to say i love the art you used for your Bio/Profile. Its just stunning.
I also had a quick look a your blog and it looks really interesting, ill have to read your reviews. I know someone who has done something similar.

How did you come up with your username?
What are you studying at Uni? (If you dont mind me asking)

Oh, how are you doing today?
And what have you watched recently? :)

Hibbington Oct 24, 2020 8:14 AM
Greetings SpaceWhales, I recently gave you an invite to a seasonal club called the Anime Guild.
But I do also like to interact with the people I'm looking to bring into the club.
The club consists of a lot of different seasonal activities from Power Rankings to OP/ED Comps to Seasonal Cards.
We also have an active Discord Server as well as annual events throughout the year ^.^.
*If the invite doesn't go through just message me about it*
I see you and me both have not written a review in years. I really wish they would do something with that side of the website to make it more enticing to do.

Azizdy Sep 7, 2019 4:31 AM
Happy to see that you’ve been enjoying this season of anime! With all the non seasonal stuff I’m watching, I tend not to follow seasonals all that much, but this season does seem to be filled with some gems. At the very least I have been following Vinland Saga haha, which I’m greatly enjoying. As a fan of the source material, I hope you get to like to it!

On my side, anime has been pretty fuckin good with the underrated stuff I’ve been getting into. Saiunkoku Monogatari has been neat, it does carry a lot of elements of a reverse harem, but the characters are likable and he interactions are enjoyable and the implementation of politics has interesting to say the least. Votoms has been surprisingly good, Animation is rough but decent, and it’s all made up with its really engaging story and compelling MC. Watching this show is probably what’s making me realize that have a thing for old anime.

Hyouge Mono might be the series that will end up being the highest rated of the bunch. It’s a series where you have to pay extra attention without just taking it surface level, and being that attentive has been nothing but rewarding. The writing is terrific, the characters and dialogue are incredible, the politics are presented perfectly, everything seems so well crafted it has me sucked in completely into it. Although it does strike me as something that isn’t for everyone, as I think people might be lost in its plot should they fall off of it, or might find it boring due to its slow pacing, so I’d go into this with an open mind.

I have a lot more underrated gems under my sleeve to watch though, my search for them is far from over even with college. But aside from that, glad you seem to be doing well! <3

Azizdy Sep 2, 2019 3:49 PM
Yeesh, sounds a bit rough. I’ve been doing good for the most part. Just got my first week of Community College down, while my anime watching habits have gone down a bit, I’m sneaking a few stuff in.

Azizdy Mar 22, 2018 9:44 AM
How's Gundam going for you? I've always planned to get into it having watched Unicorn, but the saggy animation always bugged me, and I see you've rated it highly well.

Azizdy Feb 7, 2018 9:55 AM
Hmmm, I'm sorry and sad to hear you didn't enjoy those shows. With what you already enjoy, what's a popular that peaks your interest? I'm sure there has to be a critically aclaimed gem you can love.

Amine_Fan Jan 31, 2018 2:42 PM
Really surprised that N&T H&T became your second favourite! From what I know it's as far from my wheelhouse as Mars.

Did it speak to you personally in any way?
All Comments