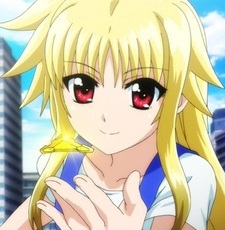 TheBigGuy Sep 9, 9:02 AM
Hello, thanks for the nice message and the FR.

It's nice to meet someone who has watched Potemayo too. And Henriette/Arsène, she really grew on me over the course of the series.

Here's the 'official' Anilist entry, if it's helpful.

KasumiArisa Dec 18, 2019 4:23 PM
Thanks for adding and glad to be friends with someone who has similar interests. :)

INU4SH4 Oct 18, 2019 1:22 PM
Yeah, just a glance at my profile and you can probably see I'm not a fan of moe moe at all, but Milky Holmes totally blew my expectations away. It has something special I can't explain. I just love how it really capitalizes on its absurd logic and uses it as one of its main strengths. Based on visuals alone I would have never thought this anime could be so great.
I'll be done with the second season tonight and depending on how it ends it might become my new favorite anime of the decade.

Honey_Flash Sep 6, 2019 3:47 PM
Hey, always good to find another person who appreciates obscure magical girl anime! Mind if I send you a fr?

I’ve actually been thinking about Rayearth a lot recently. I’m super interested but I’ve got so many other things I have to finish.

If you want an obscure magical girl anime, I actually watched one very recently called Rakugo Tennyo Oyui. I ended up watching it through a Malaysian bootleg DVD copy with English subtitles ranging from “decent enough” to “iffy”. It’s about a high school girl whose goal is to become a Rakugo master. Alongside her, a 12-year-old genius, a scientist, a kendo girl, an ouju-sama, and a shy glasses girl get transported to the Edo period to fight off demons that areinvading the town. Some characters are kind of boring and needed more than 12 episodes in order to properly develop, but whatever. I know it sounds boring, but part of the joy of watching it comes from magical girls geeking out about their niche, nerdy hobbies. Yui’s classmates may think she’s kind of a weirdo for wanting to be a Rakugo master, but she never lets that quell her passion. The scientist and 12-year-old genius are also really adorable when they geek out over Edo history. To see them transported to a period of time that they’re total nerds about is actually kind of great idea, but I don’t feel that this was explored enough. The other girls need more development and are sort of boring. I feel like Rakugo Tennyo Oyui had the potential to be better than it was. It was a really cute idea, but if some parts had been moved around a bit and if it had gotten more episodes, I think it could have been pretty darn good!

Honey_Flash Sep 6, 2019 2:42 PM
Your taste is really interesting! I immediately clicked your profile when I noticed you had a Cyberteam in Akihabara avatar. I still need to finish that one. I have it on DVD and have watched several episodes but can’t even remember where I left off (which is why I haven’t even added it ti my list). It’s a strange show that seems to mix so many different genres and it’s kind of a mess, but in a lovable way. May I ask why it’s one of your favorites?

Are you watching Vrains aswell ?

I see we don't only have Pokemon in common :)