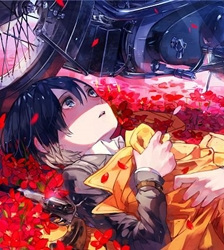 Hydre_Ito Jan 24, 2:43 PM
are you the girl who had the indian accent?
[heard your voice once in the vocaroo thread]

you profile is rlly cute btw ^^

Sanksimilian Jan 20, 12:23 AM
Nothing special, I just want to improve my skills. if I can reach my role model’s level i will consider it again

I_shoot_kids_fr Jan 19, 11:12 PM
im doing just fine finally im done with my exams and my next exams are already here it just feels like an endless grind 😅

kihel Jan 15, 6:01 PM
It was uncomfortable to be slightly different from reality. Also, too much emphasis on dialect. No, I live in the countryside, but not in Kyushu. In the play, I'd say it's an area that has moved from Kyushu.

Fukuoka is a city, I think. I went to the movie Slam Dunk on the first day. I went to see the movie in the evening, but I was surprised to see that some of the merchandise was sold out. In Japan, there is a movie theater in a big shopping mall. I think the mall you saw with the Slam Dunk poster must have had a movie theater. As for the content, I don't think I can spoil it with a good comment, so if you really want to know, I wrote a rare review of the movie one, so you can read that one.

Personally, I don't rate it too highly because of the changed voice actors and the full CGI.

kihel Jan 12, 6:20 PM
Thanks for your comments on my birthday wishes.

I went to see Suzume no Tojimari the month it was released. I laughed at the rural descriptions of the local stations and places where I actually live.

Byousoku 5 Centimeter left me with only the theme song, so I can't say anything about it.

I saw Gothicmade at a revival screening, and although the colors were beautiful, the robots didn't move at such a fast pace. I wonder if it would be difficult to distribute the movie or make it available on DVD since the original author wants people to see it in movie theaters. Also, when I saw the staff roll, I was surprised to see that the original author is on the music staff and participates on bass guitar.

MikeOnHighway61 Jan 9, 8:01 AM
Hi!
Thank you for your amazing Secret Santa anime recommendation, they were really spot on!
I had to order both series first and it took some time for them to get here, so I just got to start watching yesterday. I've been through the first six episodes of Kare Kano and it is exactly the way you described it! Hideaki Anno uses his EVA magic with some cheeky irony but still accomplishes so much character depth in the often mundane genre of the RomCom. I haven't started Uchouten Kazoku yet, but I will after finishing Kare Kano :)
Thank you again for the great recommendations! I hope you had a great start to 2023! Take care!

DigiCat Jan 8, 5:34 AM
Reinys said:
I'd just watched those episodes today XD
You've reached the point where i dropped it, what are your thoughts so far?

elnino02 Jan 5, 6:47 PM
I'm looking forward to watching Texhnolyze someday - I have high expectations. And yeah, Haibane Renmei was absolutely beautiful, there aren't many like it.

Oh yeah. I think you don't have to understand all the words to understand the story, and you'd start to get familiar with the ones that keep popping up throughout. This is one of those manga that require a bit of patience imo.
All Comments