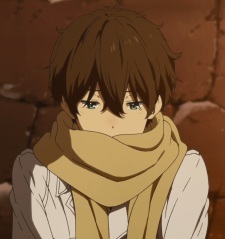 Black_Sheep97 Oct 4, 2019 2:02 AM
Hibike euphonium season 2 is rated significantly higher than 1 yet alot of my Mal friends including you have rated it lower why is that ?
No spoilers please I haven't watched it yet, this is just something I want to know.

Okashikoma Sep 29, 2019 2:51 AM
I should've went onto Uchouten Kazoku s2 right after finishing the first, but I have a bad habit of getting sidetracked, haha... More Benten sounds great to me though.

Okay cool, I added you. Thanks

Okashikoma Sep 28, 2019 8:34 AM
Do let me know your thoughts as you progress through Utena (HnK too). Regarding the latter, it also comes close to being one of the most heartbreaking stories I've consumed. Looking back on how Phos used to be compared to their current self, their innocence gone due to experiencing loss and getting to learn more about their world.

I agree. It's an important turning point in my life. But for now I'll be chilling!

Uchouten Kazoku was great. The characters'... eccentricities made for some really fun interactions for me. Yasaburo's way of living is one that really speaks to me, enjoying the moment without letting the past get to him or holding grudges. Not giving a fuck about social norms either. It's a behavior which is even further exemplified by how he occasionally takes on the appearance of a girl. I also really liked Benten's character, although I have a hard time discussing it because of her mysterious nature.

I appreciated how natural the flashbacks felt. Instead of giving one huge flashback all at once which could be too much for the viewer to take in all at once, they were broken down and their events foreshadowed even in seemingly mundane conversations. Some instances of its foreshadowing really impressed me. The family drama towards the end got me more emotional than I'd expected. Btw, do you have a discord? I'd like to add you if you do.

Okashikoma Sep 28, 2019 4:48 AM
Hope the exam went well for you. Seems you're putting that free time into good use by watching Utena and reading Houseki no Kuni (you should try catching up to it asap, latest few chapters have been crazy)!

But man, time sure flies huh. I believe you were at second year when we first met.

In a bit of an odd spot in life to be honest. I've been considering going to university since last year but haven't done so yet... Every time a new semester approaches I keep saying I will only for me to end up not doing shit. I'm not upset though, in fact I'm doing quite well with all the free time I have lol. And it's not like uni's the only option I have since I can just work with my dad.

Okashikoma Dec 27, 2018 5:01 AM
ah 5th year already huh? actually I'll be going to university this january, and yeah I'll study medicine. honestly nothing much's going on in my life, pretty uneventful but it's chill at least. new year's approaching, so that's cool.

a bit late by now but merry christmas, although I doubt either of us celebrate it