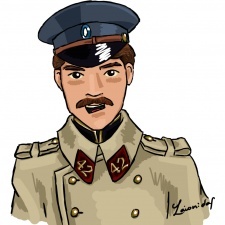 Hayley_N_Haydet Apr 21, 2018 11:55 PM
I didn't know; I saw a comment on your profile that appeared to be in Dutch and made an educated guess based on that bit of information :3 It's possible that watching the documentary Mag ik dood (which I thought was pretty good, BTW) gave me some ability to identify Dutch and distinguish it from German. I'm afraid I don't know much about your country aside from a few facts. One thing I am well aware of is that it has produced some outstanding death metal and black metal music via bands like Asphyx, Kaeck, Pestilence, Sammath, and Sinister. Some of it is among the best I've ever heard :)

I believe that "Kuroyukihime" was intended to be a play on "Snow White", yes. "Snow Black", in other words.


There's also a rumor/theory that Kuroyukihime is the offspring of a couple in SAO, though perhaps it has been refuted.
I live in Imperial America. I take it you hail from the Netherlands? The image looked a little familiar because it looked like it could be a character out of an old or retro space opera anime like Uchuu Senkan Yamato or Gundam (maybe). I wasn't able to look it up on Google, so I thought it might be an original piece. It looks quite professional. I think it's really cool that you use your own artwork as your forum avatar and profile pic; I don't see many Users doing that. (I hope to do the same in the not-so-distant future.)

I was getting my headphones and sat down wbehind my PC to listen to some random music,.. then you posted that,.. nice!

Arigato gozaimasu San-Peregrinus.
Ieie. I'm glad that you got something out of my "intermission", Laionidas-san ^^

And my forum avatar is Kuroyukihime from Accel World, which is related to Sword Art Online. Where is your avatar/profile pic from? It looks vaguely familiar, but I doubt that I've seen it before.

Hibbington Sep 11, 2016 3:47 PM
Greetings Laionidas, I saw that you were watching a few shows from this season.
At the Anime Guild we discussion, review, and vote on various parts of the currently airing season.
An example is we choose the best Opening, Ending, Character and of course Anime of the Season.
If you are interested in joining I have already sent an invite as well as provide a link to our club ^.^ - http://myanimelist.net/clubs.php?cid=63899

Answering your PM will take a little longer hihi~
I was kind of speechless reading it the first time... o.o First of all, I want to apologize for the amount of time you had to wait for this delivery. No internet and then huge load of work made me quit editing pics. My skill got a lot worse so these cards and claims may seem lame to you and I'm sorry :D Anyway, I feel proud of myself - I finally did it!


Unfortunately, someone deleted the threads before I could deliver these cards, so if I missed anyone, I'm terribly sorry!

ALL THE HOT GUYS FROM A&M

Please save & rehost
Deleted in 14 days.
Thank you for requesting!

MonadoII Mar 6, 2016 5:34 AM
That's actually a quite interesting way to use your watching list^^
But still I'm sure that you're watching more animes than me~
I'll catch up soon though hihi :>