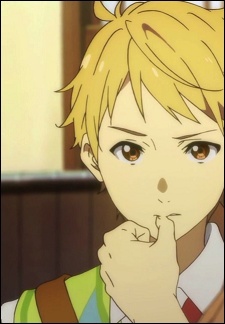 llamaben Aug 14, 2013 12:38 AM
Yeah I ended up getting 3 strikes in a couple of days at the end of last season. The strange thing was that 2 of those videos were already private at the time.

llamaben Sep 1, 2012 3:41 AM
I'm probably not going to make one this season. There are lists in Japanese out there though, like this.

ainthemix Jul 21, 2012 3:54 PM
Damn, I wanted to add him, but I was too lazy to google his name and there is no anime picture of his in the MAL database. note to myself: update his page with anime pic
Nah, I don't really like Kise. Not that I don't like HIM, I don't like bishounen blonds in general. xD

It's amazing. Ah, when you see a certain moment of what we'd actually like to see, you'll forget everything about the end card. :D

Yup, yup. I don't mind shirtless Kagami or Teppei, or Kasamatsu, or Iwamura, but some half naked original Aomine would be nice. :D

Do not worry, we shall fangirl (even if I am a boy, I am most certainly fangirlng atm) together. :D (●♡∀♡)

Our first Newsletter is to inform you that we have opened the Membercards and you are free to request them :)

You're also welcome to check out the other topics at the club:

ridojiri Jun 8, 2012 12:42 AM
well ive been checking out most of the other shows this season so maybe ill have a look at kurobas then. ill also labour on in the ao no exorcist manga... and watch zegapain!

tsioku is just a movie, and honestly you can skip most of the terrible dorama, its only charles and to some extent joaquin slash thats the eyecatch. plus sort of hilarious but enjoyable voice acting.