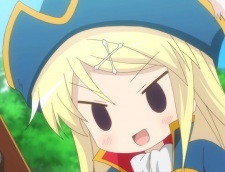 Bokutachi no Remake
Yesterday, 5:52 AM
Plan to Watch · Scored -

Hi there! The magic pigeon invites you to the new club Sweet 'n sour, join if you accept the invitation^^ Mr pigeon says have a nice day / night!

sweetmerodii May 23, 6:21 AM
Japanese, Greek and Egyptian.

Klefki_of_Awsome May 19, 5:52 AM
Happy Birthday, Karenbean_Pirate ~!^^
Here's a Special Birthday GIFt from me to you to celebrate~!:)

I wish you an early Happy Birthday! May all your wishes come true this year!

Zefyris Mar 8, 4:04 AM
Hmm, get ready for a fairly long explanation there then, sorry about that :).

it's a matter of "adaptation" here. When something from a written media like a novel gets ported into a visual media like anime, it's expected that there will be a need to ADAPT quite a lot of things in the process, hence the idea that it's an "adaptation" rather than a simple port.
Alderamin as an anime failed to check every single box required to qualify as a proper adaptation.
-An adaptation is not just "throw some novel lines at voice actors and animate the result of their voice acting". When you adapt, you'll need to cut, and it's important that the effort to link back, to change and adapt things properly is made so that the flow isn't awkward, so that all the necessary informations are still here and don't feel barely linked. Here it's not done. Part of the lines, of the scenes, or even full scenes, are cut, which is expected, but what remains, before and after, is kept as it was in the novel without ADAPTING it to fill for the lack of the in between lines and scenes.
This results in a lot of very clunky dialogues and scenes (it's very visible in episode 1 for example) because of that.
- An adaptation sometimes has to make choices to rearrange the story telling , but not all choices made in adaptation are good. One choice that is often made for example is to add an in media res to the anime, to hook the viewer from episode 1 when things will only start to heat up several episodes later. it's not necessary in a novel format, but in an anime airing one episode per week, it's often viewed as necessary when adapting a slow paced novel to ensure the audience will be intrigued enough to come back for episode 2 and more. Here, we don't get in media res since it wasn't necessary, but we get instead choices that proved to be terrible on the long run. They decided that the anime needed a "waifu" to sell (and considering it didn't sell anyway, they were wrong), so they removed character times for all characters except for Yatori, and for her, they decided to go as far as inserting a whole episode adapting a scene from vol 7 in between their adaptation of vol 1 and vol 2.
They made a character that wasn't supposed to be receiving a focus the central piece of the anime version, and they went to the extend of displacing the last scene of vol 1 between Chamille and Icta (the two real main character of this work) to the end of the anime instead, where it didn't belong.
They built the hype for Yatori x Icta in a way that wasn't supposed to be built; they estranged Chamille in a way that resulted in a lot of the anime viewers disliking or misunderstanding her in unbelievable manners; then they added back the scene between Chamille and Icta like an afterthought that had everyone get annoyed at Chamille's request because it was now out of place and context (that's what happens when you remove the wrong things, don't link back the remaining material, and instead push for waifu-ing another character in that screen time you salvaged from the removals); and the result were as expected. Peoples misunderstanding the importance in the story of the relation Icta- Yatori and wrongly shipping them; and anime viewers getting upset after reading LN spoilers because well, the LN is a military LN so it ain't going to focus on waifu or romance to begin with; and for characters, focus on building the interaction between Chamille and Icta way more than between Icta and Yatori; and so on.
You know, the character that the anime made insignificant, hated even by some, in the LN is "supplanting" the character that the anime waifu-ed, that the anime made peoples misunderstand her importance and her relationship with the protagonist? yeah, good idea, it's sure to bring the correct crowd to the original material right?

There would be a lot more to point out, like how you can't in a military story, have the anime studio adapting it unable to understand the tactic used so when they show the geography on screen they fail to make it in a way that the strategy makes sense or work (they simply needed someone, even if just the author, to check and point out the failures on these points and fix the way the land was drawn accordingly. It wasn't hard to do);

but anyway, the 5 points difference is because the only good thing about the anime version is what remained of the source material. The anime brought nothing an adaptation needed to bring, brought instead changes that were unwanted and resulted in making things worse; and it shows with numbers. Anime didn't sell; LN didn't sell more than before really; and LN was never licensed in the west clearly partially due to the backlash from a part of the western anime viewers that read spoilers and concluded that "LN is shit and I don't want to read it".

From the point of view of someone who loved the LN; seeing the anime bring in the wrong audience up to the point that the western alderamin fanbase's consensus is along the line of "trust me, you don't want to read what happens in the LN " is just plain frustrating. An anime ADAPTATION is supposed to bring in some plus, not supposed to bring in some malus. I've rarely ever seen an anime where I thought "I wish no anime adaptation for it was ever made, that would have still been better than this kind of result". Hence the 4. For all the crap that the anime decisions brought to the LN. It may be harsh, but if I'm not harsh when that kind of thing happen, when would I be harsh ?

I'm glad to see that you also like to watch series you have already seen. I love to re-watch series.