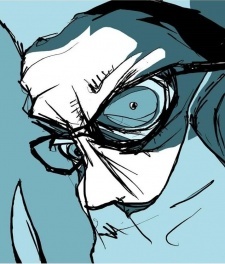 Very similar feel and humour. Aki from BakaTest and Kousaku from Nourin are spitting images of each other in personality! Nourin is smuttier though ...

Anime music videos with the premise of saving an angel

Mecha and politics in a school based, adult world and alternate timeline setting. Both at time comical but mostly intense and gripping. Highly recommended!

Same mangaka, so the similarities are endless - humourous happenings between a bunch of quirky characters in a work-based setting. If you liked one, you will like the other!

In both series, a single male adult opts to take on the responsibility of looking after a child (children) due to a force of circumstances. Both are warm and atypical anime series. Usagi Drop has a MAL average of 8.65, which should say it all really whilst Papa etc. is let down by its dubious name, which I am sure will detract viewers away from a really lovely show. Both recommended!

Miyakawa-ke is a spin off from the Lucky Star series featuring two of the very minor characters that appeared throughout the series. Similar art and style.

Same writer, story, character designs, setting and even opening theme singer (KOTOKO) If you've watched one then you've practically watched the other and can update your MAL list accordingly ... disappointingly unoriginal ..

Both are characteristic Josei stories with a cold but extraordinarily talented male character who is pursued by a ditzy but endearing female character. Nodame revolves around the theme of classical music whereas Itazura focuses on the movement of the characters through from being teenagers to adulthood and around healthcare. Both are superb but Nodame is arguably a masterpiece ...

Over-sexed female lead chasing after average male lead in both. Kanokon is a poor man's To Love-Ru though ...

Similar feel, art, music and setting. However, Laputa is far superior in every way and if you enjoyed Fractale, you'll be blown away by Laputa.

Same atmosphere and comedy but DKnN is with boys and Minami-ke is with girls. If you like one, you will like the other.