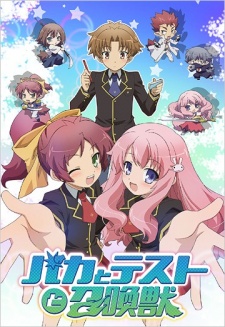 Komoto Sachi, the assistant producer of Baka to Test to Shoukanjuu, gave her analysis on the relationship between the nature of the fanbase and the media sales. She said the cheap goods of Baka to Test priced around 1,000 yen have been sold quite well, but its enthusiasm doesn't extend to the DVD & Blu-ray priced at 6,000 ~ 7,000 yen. In contrast, the DVD & Blu-ray of Queen's Blade as well as Ikkitousen have been sold constantly for years although she has scarcely heard of the excitement of the fans. The interviewer and Komoto called them "Silent Majority Gentlemen", who never speak out but quietly support the titles.

Ishii Tomohiko, the producer of Higashi no Eden, also found out that the 1,400 yen Eden novel was sold considerably better than the DVD & Blu-ray. He realized the difficulty for the young fans to spend 4,000 - 5,000 yen x four volumes.

Sources: Scan of Animage, Scan 2 not sure of the magazine name, Business Makoto[/i]

I was actually reading about this a few days ago and I gagged on the price. I'm not sure if its just two epidodes per volume for every anime, but that seems to be the norm.

Not surprising. I mean, would you openly admit that you watch animes about busty girls ripping each others' clothes off with swords and titty acid? I wouldn't. >_>

Well, I do at least have one good thing to say about Queen's Blade in comparison to Baka Test that I have seen so far.
Queen's Blade tries to bring sometime psuedo-classy to Queen's Blade along with it's titservice. It fails it, but at least it attempts. Baka Test is at best only more than a mildly generic comedy anime.

It has a nice packaging and looks like it's going to be something interestingly serious and dark behind all the fanservice. It also has a history and seems like something "official", and has a really nice theme song.

Unfortunately under the surface it's absolutely no different than Koihime Musou. So I have a hard time appreciating it's failed seriousness more than Baka Test or rating it in any way higher. Baka Test is more generic, but at least it manages to have a good pacing and random funniness for a generic cheesy school comedy show.

It's okay for Queen's Blade fans to enjoy fanservice. But you can say the same about Moetan fans. For some of us T&A doesn't make us detest your taste or feel superior, but we are, in fact, scared of T&A and would rather have fanservice of a different kind. And understandably shy away from it or find other fanservice-y shows to be better(for us).

I like Baka Test better because it's fanservice has greater variety. They have a "trap" character just for us Transgender fans, they have the flat loli-esque, they have the oppai, they have gay/yaoi references. I prefer Baka Test's multiple demographic appeal and funny success rather than Queen's Blade's serious fail.

Are you guys seriously implying these shows are even made for the same demographic or age groups??

Take a guess which one has ACTUAL purchasing power in the first place.
The comparison is not balanced at all, while the prices are kind of crap too.


Siva said:
AlexSadist-sama said:
People are suckers for fanservice. Screw them.
By "fanservice" it could mean many things in many difference way and it doesn't have to be boobies or panties.
Damn straight. Baka Test caters to at least an equal amount of niches and fetishes most people don't even recognize. Heck, more even (!)

TL;DR removed because basically repeats what i already said just in longer form.

Ranivius
Woah! Down, boy. A little hot under the collar for T & A discussion. FYI, I love Ikki, QB and others of their ilk. I rate them high too. And I watch every incarnation of their respective series. Who doesn't love tournaments with lots of action?

I take it though that you're not one of those gentlemen; as apparently, you cavalierly designate GITS fans as douchebags and quite dismissive about some things by labeling them as BS. Lest you forget, Motoko has great T & A.

Ikki Tousen was....
But I really enjoyed Queen's Blade. Fans shouldn't be so hyperactive and loud anyway.

Couldn't get over the term "Silent Majority Gentlemen" LOL. It needs to make it into a dictionary eventually.

I wonder how much a series must sell to be considered to sell well. The first volume BR of Baka to Test have ranked 15 in sales the last week (7 before that) according to ANN. If that isn't good then anime sales must generally be down the crapper. Though, they brought them on themselves with their ridiculous prices and stupid distribution network. I can't even begin to imagine what the poor saps that bought the Green Green singles for $50 would have felt like, I bought the entire set for $15 and still felt ripped-off.

enerjak said:
hm does anyone know how much is 7000yen in dollar
i know that here in sweden is 1dollar is 7,8kroner
and that a volume of manga pocket in a bookstore cost like 78kr = 10dollar

If they're paying that much for DVDs, I can understand why sales are not that good.

Baka Test doesn't have rewatch value, QB does. And no, it's not just because of the nudity, it has great action and a nice story. Only the people who have watched or are watching S2 feel this way though :|

I'm one of those silent majority gentlemen (for Queens and Ikki)... do i get a prize?


TsukikageRan said:
True enough. Fair enough. But when it comes to Queen's Blade, we know what that 'fan service' means. It's not intellectual discussions similar to Ghost in the Shell. Except if your Q & A is T & A.
Because we all know we enjoy 'intelligent' discussions with other anime fans on a daily basis. Seriously, outside of MAL, how often do you discuss BS like that or talk about how deep TTGL or LoGH is? Quit lying to yourself you're just as bad as those people who love Ikki and Queens. Except in this case Ikki fans are gentlemen and GitS/CG fans are just douchebags who are afraid of some T&A

7000 yen a volume? That's a little too expensive considering how retarded the anime was. :/

They must be surviving only on ramen chopped up into tiny squares. That's why they can't afford those Blu-rays.

enerjak said:
hm does anyone know how much is 7000yen in dollar
I know.

hm does anyone know how much is 7000yen in dollar
i know that here in sweden is 1dollar is 7,8kroner
and that a volume of manga pocket in a bookstore cost like 78kr = 10dollar

Looks like the Baka Test fans take after Yoshii.

They must be surviving only on ramen chopped up into tiny squares. That's why they can't afford those Blu-rays.

They finally got that their DVDs are too much. Could Japan actually be learning. I mean Queen's Blade outsells Naruto in Japan, just think about that...