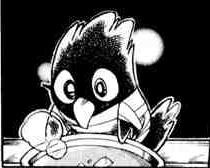 Fall Sep 9, 2016 11:16 PM
Has your opinion on Please Save My Earth changed since you first wrote your review?

PunkChinaDoll Jan 24, 2016 2:58 AM
Hey man, do I need to watch Futakoi to watch Alternative? or is it a complete remake?

doeman Jun 5, 2013 3:06 AM
screw it then. not gonna bother with this one. reading your comment was bringing back some bad memories from all the other anime i "wasted" my time on, whether had finished them or not. based off of your take on this series and the general score on mal and between my other friends, i know it's nothing mind blowing, so i'm not gonna force myself.

i have plenty of other worthwhile anime to start instead. thanks.

doeman Jun 4, 2013 11:33 PM
yo, dunno if you remember me. from the ssbb club. was checking out my friend stats for hanasaku iroha and LOL, you gave it a 2 after dropping it on episode 21?

what's the story behind that? should i even start it or was that low score given because of some personal issue you had with the anime?

If you end up confused as to any of the factions, you should throw me a message and I'll fill you in, as they get thrown around frequently and I spent an episode or two with difficulty following the story until I decided to google the terms to see what they mean. I believe there's three main factions. The biggest issue people seemed to have with following the story was losing track of what the terms meant.

One of my favourite ED's, by the way.

The_Duke_of_Soul Apr 26, 2013 3:18 AM
The best spoiler-free description I could give you would be to say that at the beginning, the main character becomes a victim of circumstance, and is in the wrong place at the wrong time. A minute decision creates a change of which the significance -seems- immediately evident, but really, the more the series progresses, the more we realize what it truly means to experience the things he lost. Whether they're more or less life-changing than you originally thought will define how you interpreted the message of the series. There are a lot of ways to think about it. Don't worry by the way, I didn't say anything you could divulge spoilers from. What I can say is that if you watch the first episode, you'll probably immediately know if it's something you'll enjoy or not. It's worth it just for the OP and ED, which are both -excellent-.

As for Paranoia Agent, it's a massive mindfuck of epic proportions. If you're familiar with Satoshi Kon at all, it's his masterpiece. After writing the script for Paprika (the film Inception was largely based on) he had a -lot- of unused ideas, all of which he decided to wrap into Paranoia Agent. It's a series with a clear plotline that, because of its origins, also contains some episodic outings in the middle.

It's a masterpiece for sure, though. The one thing I can guarantee you is that whether or not you take something away from the message of Paranoia Agent, you will never have experienced such a way of expressing it before. It's a very unique anime, one of the creepiest and most disturbing I've ever seen. It's very Japanese, also, there are a lot of things that are difficult to understand for non-Japanese natives like myself. For example, in the episode you reference, when something bad is about to happen to the nice fat kid (while he's walking with the jealous kid), he's holding a palm tree in his hands, seemingly for no reason. The palm tree is a symbol of victory in Japan.

The_Duke_of_Soul Apr 25, 2013 3:50 AM
Out of curiosity, why haven't you watched Tale of Melodies? I haven't gotten around to it either, but I loved Tale of Memories.

Also out of curiosity, Paranoia Agent. y u no do?