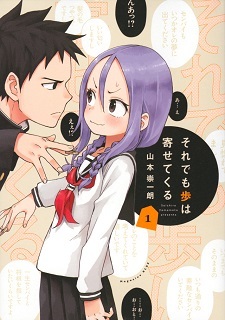 The official website of Weekly Shounen Magazine announced a television anime adaptation of Souichirou Yamamoto's Soredemo Ayumu wa Yosetekuru (Even So, Ayumu Approaches) on Friday. The anime series, commemorating the magazine's 60th anniversary, will debut in 2022.

Synopsis
On a whim, first-year Ayumu Tanaka quits the Kendo Club to join the illegitimate Shogi Club. Urushi Yaotome, the president of the club and a master of shogi, is thrilled to finally have a playing partner. As Ayumu's upperclassman, Urushi endeavors to be his shogi mentor and student role model. Too often, however, she finds herself blushing with embarrassment! Stone-faced and honest, Ayumu sees no issue with calling Urushi "cute." Although Ayumu likes her, he refrains from confessing and promises himself to first beat her in a game of shogi.

Through school life and shogi games, the two students have many hilarious and heart-warming adventures. Ayumu enjoys every second with Urushi, but he is still a long way from beating her in shogi. With the commitment he made to himself, will Ayumu ever get the chance to confess his feelings to Urushi? [Written by MAL Rewrite]

Yamamoto originally posted the romantic comedy manga on his Twitter account under the title Shougi no Yatsu in April 2018. Weekly Shounen Magazine began serializing the manga the following March. Kodansha published the fifth volume last October, with the sixth volume scheduled for release on January 15. As of July 2019, the manga has over 7 million copies of its volumes in print.

wind_scar said:
Maybe I should go and read the manga~ I'm really starting to enjoy this art-style!
Definitely worth it, it's super cute.

Maybe I should go and read the manga~ I'm really starting to enjoy this art-style!

one of the best manga out right now, this is great news!

Like Takagi-san, this is a one note manga. The saving grace is that the artist is amazing and his(her?) characters are very expressive.
The story, though...
I think a single 25min episode would be more than enough.

A news I want to read in such a long time. Very hyped for this!!

Who is the seiyuu? Owo

bastek66 said:
Mei2Mei said:
The synopsis seems interesting... And the male's voice.. is that Maeno?? It sounds like Maeno XD
It's Hosoya obviously
ooh.. AoT Reiner's seiyuu? Indeed, That fits too.

Mei2Mei said:
The synopsis seems interesting... And the male's voice.. is that Maeno?? It sounds like Maeno XD
It's Hosoya obviously

From author of Takagi? It's weird that we'll get this rather than an adaptation of his other old manga. Is it that interesting?

oh gg. will read it for now.

HYPEEEEEEEEEEEEEEEEEEEEEEEE! That's a great news! Especially the creator has made Karakai Jouzu no Takagi-san! This year is AWESOME! Can't wait to hear more news from it! XD

It this the guy doing big forehead mangas.

Happy for him to see his works gettting adapted.

Sounds great to me. Characters seem interesting too.

The synopsis seems interesting... And the male's voice.. is that Maeno?? It sounds like Maeno XD

Sakuta002766 said:
One of the boring manga i have read
unfortunately, same here. this manga is just way to damn repetitive and the romance is dead anyway

though in fairness, it does a much better job at the teasing aspect than takagi-san at least