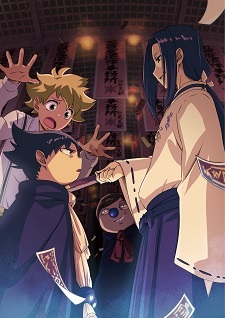 The Muhyo to Rouji no Daimahouritsu special event announced a second anime season for Yoshiyuki Nishi's comedy supernatural manga on Monday. Yuusuke Kobayashi (Arslan Senki (TV)) will join the cast as Daranimaru Goryou, an executor at the Magic Law Association and head of the Goryou Offices.

The original Muhyo to Rouji no Mahouritsu Soudan Jimusho manga began its serialization in Weekly Shounen Jump in 2004 and concluded in 18 volumes in 2008. Shueisha published a two-volume novel adaptation by Saya Amou in August 2007 and December 2008.

Nishi launched a sequel manga, subtitled Mazoku Magushi-hen, on the Shounen Jump+ website in March 2018. The manga ended with 19 chapters earlier this March. The second and final volume went on sale on April 4.

VIZ Media licensed the original manga series in English in 2007 and published all 18 volumes between 2007 and 2010.

This is a HUUUUGE surprise, I never expected it to get another season... does that mean the first one did good?? I honestly thought it was mediocre at most (animation wise, the manga is amazing so the story can't go wrong lol).

Well, I'm so happy for Nishi either way! This next arc is hella good so I'm looking forward to it!

Aww hell yeah! This series is really underrated. Happy to see a second season, never thought it'd get one.

This is great news! I really loved this show, it actually has a pretty interesting story! Can't wait for it!

Awesome news, should be getting the forbidden law practitioners this season.