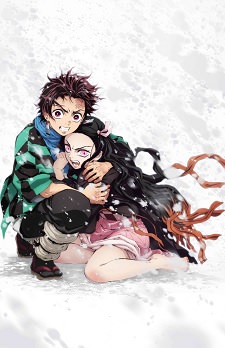 The 27th issue of Shueisha's Weekly Shounen Jump magazine of 2018, which went on sale on June 4, has announced a TV anime adaptation of Koyoharu Gotouge's supernatural action manga Kimetsu no Yaiba (Demon Slayer: Kimetsu no Yaiba). The anime series will be produced by animation studio ufotable.

Synopsis
Since ancient times, rumors have abounded of man-eating demons lurking in the woods. Because of this, the local townsfolk never venture outside at night. Legend has it that a demon slayer also roams the night, hunting down these bloodthirsty demons. For young Tanjirou, these rumors will soon to become his harsh reality...

Ever since the death of his father, Tanjirou has taken it upon himself to support his family. Although their lives may be hardened by tragedy, they've found happiness. But that ephemeral warmth is shattered one day when Tanjirou finds his family slaughtered and the lone survivor, his sister Nezuko, turned into a demon. To his surprise, however, Nezuko still shows signs of human emotion and thought...

Prior to serialization, Gotouge received an honorable mention at the 70th Jump Treasure Newcomer Manga Awards in 2013 for her Kagarigari one-shot, which became the prototype for Kimetsu no Yaiba. The latter began serializing in Weekly Shounen Jump in February 2016, and the 11th volume went on sale on June 4. Kimetsu no Yaiba has a cumulative 2.5 million copies of its compiled volumes in circulation.

VIZ Media simultaneously published the first three chapters of the manga in English in its digital Weekly Shonen Jump magazine, at the same time as Japan, as a part of its Jump Start initiative. The first volume is planned for a July 3 release in North America. The series is also published in French by Panini Comics.

Please keep discussion regarding comparing it to other shows via score / animation quality to other threads rather than the news thread.

The anime will premiere Spring 2019.

The manga is amazing and the anime will be the same when it comes to the anime because of ufotable.

The manga is not that interesting except for few chapters her and there but let's see how will the anime adaptation turns out to be.