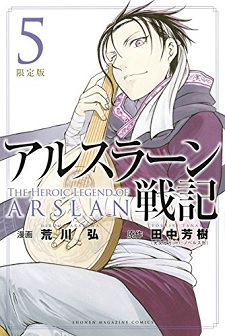 It has been announced that Hiromu Arakawa's Arslan Senki manga will bundle OVAs in the fifth and sixth volumes, to be released on May 9 and December 9, respectively. The first OVA will include an original story supervised by Hiromu Arakawa, while the content of the second OVA has not been announced yet.

Arakawa's Arslan Senki is the second manga adaptation of the novel series of the same name that started began in July 2013 in Bessatsu Shounen Magazine. It was adapted into a TV anime which aired from April to September 2015. A continuation of the series is scheduled to air in July 2016.

Great! Arslan Senki is a really well-made show and the manga has a long history, so I'm looking forward to seeing where the original OVA goes.

The ova is now in database . Thanks ! Looking forward to more Arslan adventures . Can't wait for S2 ..

Thank you so much for having added of this folder. The new system introduced recently on MAL, for the management of events or additions, that's cool!

The content of the second ova is not announcent yet...B*tch please, it's obviously going to be hot spring (rome bath in the case) episode

Great news! Hopefully it will adapt something from the manga cuz I hear the tv series have already taken the Ln root.

A second season and more OVA content. Nice. I definitely look forward to it.

I wish Hiromi-sensei would use her popularity to get Gin no Saji season 3 and season 4 out already! T_T

yay, I liked the first season well enough. will be looking forward to this.