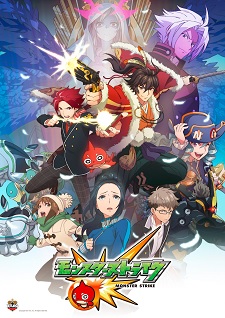 Social networking service provider Mixi announced on Thursday that the Monster Strike anime will resume its online distribution on YouTube on March 26. A new key visual (pictured) was also revealed in a press release. The series had been on break since January 2 after the 14th episode.

Monster Strike adapts the puzzle strategy mobile game of the same name. The anime was first announced in May 2015 by Mixi president Hiroki Morita and began online distribution in October. The seven-minute episodes are posted on YouTube with subtitles in nine languages, including English. Mixi reports that the series has been viewed 25 million times globally as of January 6.

Episodes 15 and 16, which will be released simultaneously, will enter the central part of the story and reveal the identity of the monster which appeared in the final scene of episode 14. Rock band WHITE ASH will perform a new tie-up song for the series.

A re-edited summary of the first 14 episodes will be screened with early previews of episodes 15 and 16 on March 20 at United Cinema Toyosu. Mixi will also hold a Monster Strike Exhibition at AnimeJapan 2016 at the end of the month.

Not this crap again :/...oh well..needed to finish this series...

Pretty underrated show. I like the new key visual though as it hints something big may happen.

Oh but of course.

They definitely have more masterpieces in store such as their fabled Sleeping with Hinako… oh and who can forget Training with Hinako?

True pioneers in the industry.

Nice nice so already at end of march the next episodes gonna start and we gonna even get 2 of em :)