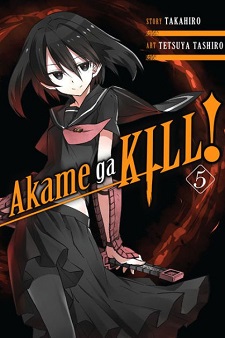 Nice!
It's great to see Blue Exorcist and Noragami on here!~ <3

One punch man is dominating

Is this a list of the translated English versions or the original Japanese versions?

I'm guessing English cause it says North American releases and Noragami vol. 10 came out in January

I wanna know what was the difference between AgK and OPM.

malvarez1 said:
Akame Ga Kill being on Toonami really helped, huh?
It was topping the charts even before that, it's been a popular series in the west for a while, both the manga and anime.

If Toonami's boosts were actually a thing, then wouldn't Parasyte have resurfaced onto the top 10 at some point? I've heard more casuals talking about watching that on there on Toonami than AgK, yet it hasn't made the manga of it any more popular.

Yey! Akame Ga Kill!! But are there any sales data? Just curious :D

So happy about this!
*3. Naruto: The Seventh Hokage and the Scarlet Spring Vol.1
*4. Noragami Vol.10

I approve of Akame Ga Kill being at #1 over the other choices there, but gimme volume 6 :D

That cover is beastly.

Woow finally something in the #1 spot that's not One Punch Man or Tokyo Ghoul.