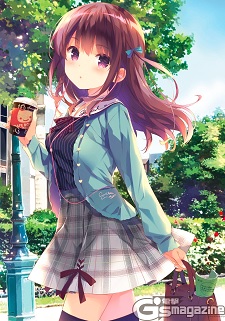 The stage event schedule of Dengeki Bunko Spring Festival 2016, which will be held on March 13 in Akihabara, has revealed an original anime project titled Girlish Number. The voice cast of the project will be announced at the event.

Girlish Number was previously revealed in the January 2016 issue of Dengeki G's magazine as a new light novel project by author Wataru Watari (Yahari Ore no Seishun Love Comedy wa Machigatteiru.) and illustrator QP:flapper (MM!). A manga series will also be announced in the March 2016 issue of the magazine, which will go on sale on January 30.

The series follows Chitose Karasuma, a university student who aims to become a voice actress (seiyuu). The stage event listing further indicates that it focuses on the profession of idol seiyuu.


Update January 27
The March 2016 issue of Dengeki G's magazine revealed that Girlish Number will be a TV series.

If it's written by Wataru Watari, it better not be some girl's only group that only does cute things and act moe. From the guy who wrote Yahari Ore no Seishun Love Comedy wa Machigatteiru, I expect greatness from him. Also, this is his second collaboration this year, first one being Qualidea Code, which I hope doesn't mean that Oregairu is nearing the end.

I simply like the illustration.
Still, I should have faith in Watari more. Just can't imagine Watari + moe + seiyuu idea.

If the Oregairu writer is on board then I will probably be watching. Hopefully this doesn't go too deep into drama, though.

Seiyuu+moe=most definitely watching. Also, the art reminds me a lot of Girlfriend Kari's.

Is it just me , or the face looks too big compared to the body.

Well, the art looks cute so I hope anime will also be good. Instant PTW

Klad said:
That girl definitely doesn't look like an university student at all..

She looks exactly like Kokomi Shiina, and she looked like a college freshman so I don't agree with you.

That girl definitely doesn't look like an university student at all..

Like the art but the title sounds kinda bad lol.

Will watch because of wataru watari.

Looks like wataru watari is the current gen urobuchi in japanese otaku base after looking how his name is getting attached to so many new projects.

This is something for me. Wataru give me present again. I love you wataru.

Oh...
Wataru watari....K
Hoping for new flick from other seiyuu genre....
They show before how the mangaka began their journey before they achieved what they had (Bakuman)

Now its how to become seiyuu.... I've always admired them cause their job is not so easy and how the anime works...

Oh, being in the midst of reading Oregairu now and having watched all the anime, I have high hopes for this! I dont think itll be my AOTY (thatll prob be Erased atm whichll be hard to top I suspect) but given his inspiration from Shirobako, I think thisll probably be a very solid piece.

Liking the artwork and original stuff are always great!

synopsis kinda reminds me of sore ga seiyuu, but looking forward to this especially only cause of the author wataru watari, who did oregairu (Yahari Ore no Seishun Love Comedy wa Machigatteiru). looking forward to a nice laid back series with this.

Only reason I have any faith in this is Wataru Watari. I'll probably only watch it if it gets decent reviews after the first episode (when it eventually comes out).